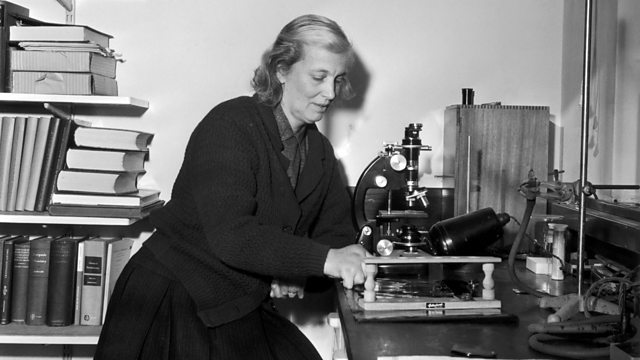 An Eye for Pattern: The Letters of Dorothy Hodgkin
Episode 1 of 5

4 Extra Debut. A portrait of the only female British scientist to win a Nobel Prize. Introduced by her biographer, Georgina Ferry. From October 2014.

The correspondence of Dorothy Hodgkin (1910-1994), broadcast for the first time to celebrate the 50th anniversary of her winning the Nobel Prize for Chemistry in 1964. Her letters, introduced by her biographer Georgina Ferry, reveal a passionate and gentle woman who juggled pioneering research in x-ray crystallography with bringing up three children, while her husband Thomas spent much of his time in Africa.

From an early age, Dorothy ran the family home, looking after her younger siblings while her parents travelled the world. In 1928, Dorothy's parents encouraged her to apply to Oxford University to read chemistry. They were confident in her intellectual ability but her father did worry that, without a good haircut, her appearance might let her down.

Dorothy's university friend, Betty Murray, described her as 'quite the most interesting woman in College'. She was passionate about chemistry, choosing to spend her 21st birthday in the lab and became interested in x ray crystallography, a new technique for revealing the internal structure of molecules. She also enjoyed archaeology and painstakingly completed intricate paintings of ancient mosaics. All the while, her distant but devoted mother repeatedly warned her not to work too hard.

Dorothy Hodgkin remains the only British woman to have been awarded a Nobel Prize for science. She really ought to be a household name.