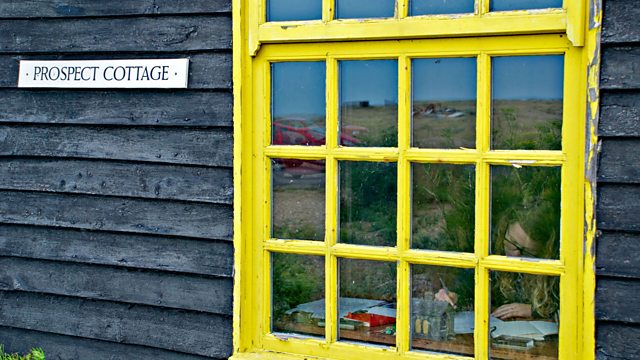 More than a Desert

Poet Kate Tempest presents a portrait of the Kent beach where film-maker Derek Jarman lived. With the words of local people, music recorded on location and other field recordings.

More than twenty years after the death of the iconic filmmaker Derek Jarman, the poet Kate Tempest - only a child when Jarman died - creates a new radio poem on the Kent beach where he lived. Tempest has been shortlisted for Mercury-prize and was named in September 2014 as one of the Next Generation poets.

Crunching across the shingle of Britain's only desert, poet and playwright Kate Tempest's words are buffeted by the relentless wind of Dungeness - home to two lighthouses, two nuclear power stations, abundant wildlife, and to Prospect Cottage.

Here iconic British filmmaker Derek Jarman spent the last years of his life building his garden, writing diaries, inscribing the words of John Donne on the wall of his cottage. Here the wind whips across the flat, barren shingle, around the fisherman's cottages, out to the open sea where rolling waves meet a vast sky.

Recorded entirely on location in Dungeness, at Jarman's desk and out in the elements, Kate Tempest weaves the words and thoughts of local families and fishermen with rich soundscapes, both natural and man-made. Amidst the quietest sounds of the sanctuary of Prospect Cottage, to the roaring innards of the power station, Tempest crafts vivid new verse, at once intimate and elemental, mapping Dungeness anew.