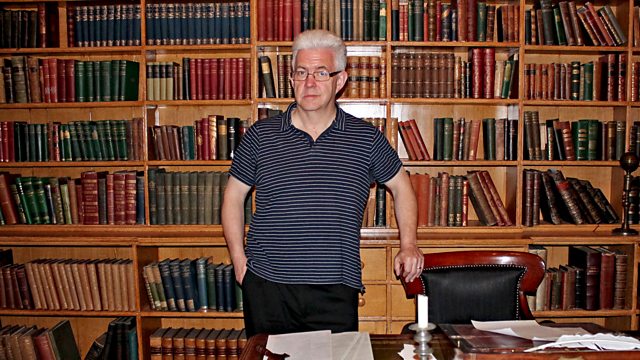 The 'Cabaret of the Word' comes this week from Elizabeth Gaskell's House in Manchester.

Ian McMillan's guests include the author and critic Jenny Uglow, who has written an acclaimed biography of Elizabeth Gaskell. Jenny Uglow's other biographies include 'The Lunar Men' (Faber), which won the James Tait Black Memorial prize and the Hessell-Tiltman Prize, and 'Nature's Engraver: A Life of Thomas Bewick (Faber). She tells us how Gaskell's House influenced her writing.

The comedy writer Dale Shaw, author of the collection of parody writing 'Letters of Not' (The Friday Project) delves into Gaskell's correspondence.

Elizabeth Gaskell, one of our most celebrated 19th century novelists, wrote her most famous novels, ‘North and South’ and ‘Cranford’ whilst she lived at 84 Plymouth Grove, Manchester; it’s also where she entertained notable guests like Dickens and Charlotte Bronte. To celebrate the opening of the house to the public this week, The Verb holds its very own salon in her Regency drawing room with Jenny Uglow, Lucy Ward, Michael Schmidt and Dale Shaw. The house was refurbished over ten years thanks to money from the Heritage Lottery fund.

The acclaimed biographer Jenny Uglow acts as our guide to Elizabeth Gaskell’s House, taking us through the garden, into the drawing room and to her writing desk to build up a picture of the life and work of an extraordinary woman. Uglow’s biography ‘Elizabeth Gaskell: A Habit of Stories’ is published by Faber.

Folk singer-songwriter Lucy Ward has immersed herself in Elizabeth Gaskell’s novel ‘North and South’ to write a song especially for The Verb. In ‘Creatures and Demons’, Lucy weaves Gaskell’s language through a song with packed with contemporary resonance. Lucy Ward’s latest album is ‘Single Flame’ (Navigator records).

The Manchester based writer and publisher Michael Schmidt is the author of ‘The Novel: A Biography’ (Harvard University Press). Shedding some light on the financial aspects of writing, Michael explains why he’s filed Elizabeth Gaskell under the heading ‘Fiction Industry’ in his biography of the novel.

The parodist Dale Shaw has written ‘Letters of Not’ (The Friday Project), a book imagining correspondence from figures such as James Joyce, Charles Darwin and Werner Herzog. In a piece of ‘experimental biography’, Shaw reveals the perhaps not-so-honourable intentions behind Gaskell’s ‘The Life of Charlotte Brontë’.