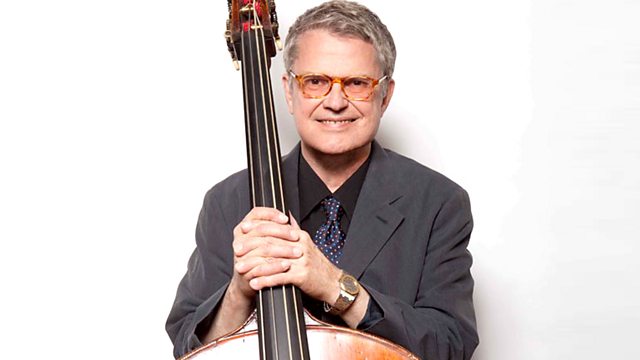 Jez Nelson pays tribute to bassist Charlie Haden with an archive performance from his band Quartet West given at 2007's London Jazz Festival. Plus an original interview with Haden.

We begin tonight with an extract of a performance by Kenny Wheeler, who has died at the age of 84. Recorded exclusively for Jazz On 3 during last November's London Jazz Festival, the influential trumpeter and composer performed with his quintet in Southbank Centre's Clore Ballroom. A full tribute to Kenny Wheeler follows in next week's programme.

Jazz on 3 also pays tribute tonight to bass player Charlie Haden, who died earlier this year, with an archive performance from Quartet West.

Regarded as one of the most influential bassists of his generation, Charlie Haden rose to prominence through his long association with Ornette Coleman, playing on the saxophonist's landmark album The Shape Of Jazz To Come in 1959. His illustrious career saw him collaborate with Alice Coltrane, Pat Metheny and Keith Jarrett, alongside his explorations as leader with the politically charged Liberation Orchestra in the 1970s.

In this programme we hear Haden in the intimate setting of Quartet West - the longstanding group that became his main musical vehicle from the mid 1980s - featuring saxophonist Ernie Watts, pianist Alan Broadbent and drummer Rodney Green. Jez Nelson presents music from their sellout London Jazz Festival performance in 2007, as well as an original interview with Charlie Haden himself.