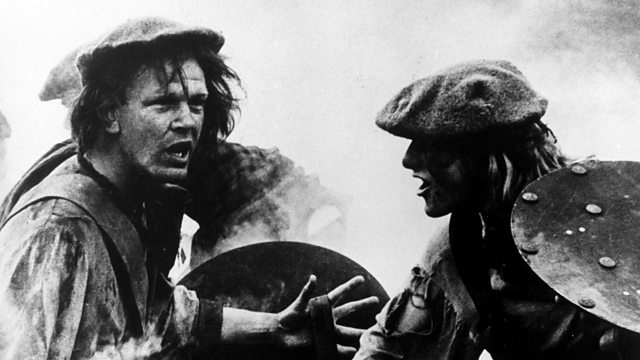 Peter Watkins' film Culloden is 50, and in front of an audience at the Edinburgh Festival, Matthew Sweet discusses its influence on portrayals of Scotland's Highland identity in book and film with Diana Gabaldon, author of the best-selling Outlander series, historian Tom Devine and media expert John Cook.

They'll explore how Culloden was received in 1964 and the way it gave birth to the television form of docu-drama and shaped the early development of Dr Who. Matthew Sweet will also be asking why the emotional imagining of Culloden as National Shrine has proved so difficult to break down despite the best efforts of Scotland's historians and heritage industry and whether Scotland's misty myths will ever be redrawn in the global consciousness.

Culloden, written and directed by Peter Watkins, was originally broadcast on BBC TV on 15 December 1964.

Diana Gabaldon is the author of the Outlander  series of novels. Her latest novel, Written in my Heart’s Blood, is available in hardback and ebook now.

John Cook is an academic expert in the study of the media, with particular research specialisms in aspects of television history, media institutions, screenwriting, television drama, documentary and film.

Sir Tom Devine’s main research interest is the history of the Scottish nation since 1600 and its global connections and impact. He has written or edited over three dozen books and over 100 articles on the subject.