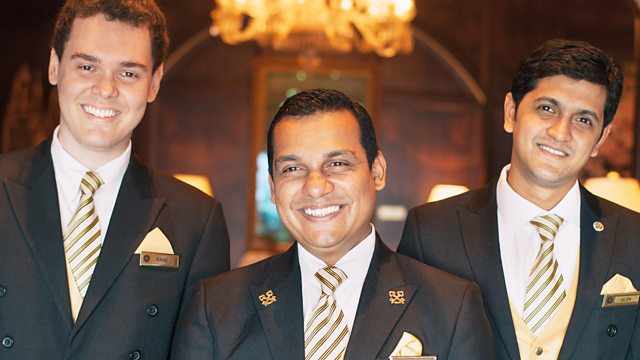 When it opened in 1903, the Taj Mahal Palace was the first luxury hotel in India and the first to have air conditioning, electricity and a licensed bar. This obsession with the new continues, with the hotel's deputy general manager Parveen hosting the first ever Christie's auction of Indian art in India - and the hope is that Mumbai's super-rich will break a world sales record.

In this grand hotel, which has hosted everyone from President Obama to the Rolling Stones, we follow the staff both front of house and behind the scenes as they welcome the latest guests through the doors. Concierge Satish - the man who can get you anything - assists regular guests Peter and Suzie Noble, who have shipped their vintage Lanchester car from Essex to tour around the Indian subcontinent. And Anoushka Shankar, sitar player and daughter of Ravi Shankar, returns to the hotel where her father first taught George Harrison to play.