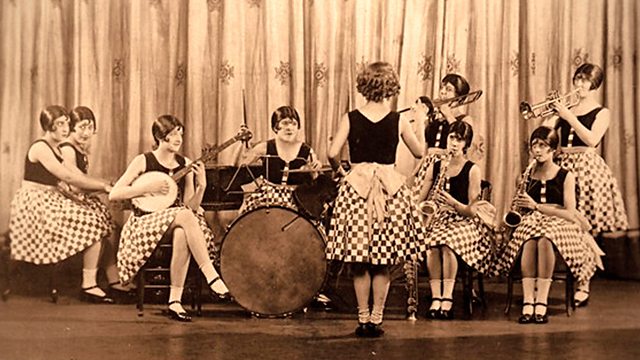 The Lost Women of British Jazz

Janine H Jones uncovers the stories of the earliest female jazz pioneers, who were erased from music history. From 2014.

Janine H Jones uncovers the secret history of women's jazz - and the tragic story of how a burgeoning musical equality was deliberately snuffed out.

Ivy Benson, Gracie Cole and Kathy Stobart became household names in jazz and dancehall, only after battling throughout the 1940s and 50s to gain recognition and respect in a male-dominated industry; a struggle repeated by other women over many decades.

This programme transports us back to Britain after the First World War was over, when women experienced their first taste of emancipation. The UK was becoming a hotbed of music. Bars, clubs and bottle parties hosted bands every night and ladies were jazzing right alongside the men.

In their own words, lady musicians of the Jazz Age tell their stories. Rare archive recordings fill in the skipped beats of their history and Janine reveals how first their careers, and their rightful place in history, was quashed.

Researcher Jen Wilson, historian Val Wilmer and drummer Sheelagh Pearson break fresh ground in this under-researched area and expose the hidden truth about the role of the pioneering women in early jazz.