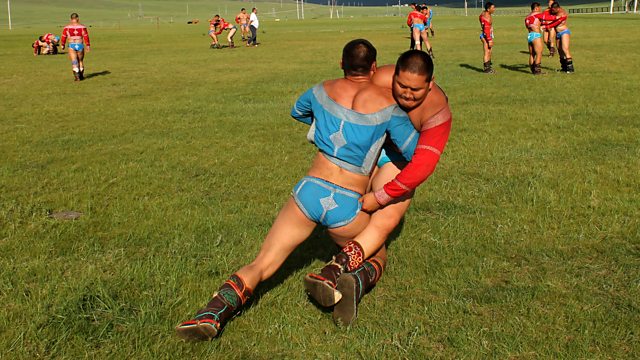 2014: Peter Geoghegan. Wrestling with the Future

The winner of the BBC/RGS annual dream travel award Peter Geoghegan is in Mongolia to learn the skills of traditional wrestling, as the nation evolves into an industrial powerhouse

The winner of 2014's BBC/Royal Geographical Society award for a dream travel project is Irishman Peter Geoghegan. His ambition: to learn the physically exhausting skills of traditional Mongolian wrestling, on the ground in the depths of the Mongolian countryside. But with the nation's economy undergoing a phenomenal boom, this mineral-rich nation, now an industrial powerhouse, must face uncomfortable choices between tradition and change.

Mongolia's wrestlers are world famous; they eat prodigiously and grapple fearlessly for hours in the searing sun. To be a wrestler is not just part of manhood's rituals, it's an integral part of being a Mongolian, indissolubly linked to the people's old traditional life as nomadic herders: a Mongolian nomad must possess the strength to bodily lift his beasts. Each year the national Naadam or games brings together the country's greatest wrestling champions, in exhausting contests of bodily strength and guile. But today, as Peter Geoghegan discovers when he joins a band of three dozen men at one of their training camps, they now arrive in sleek new four-by-fours and often work in western-style jobs in the traffic-choked capital, Ulan Bator.

As the falcons wheel over the steppe, Peter nurses his many bruises and ponders the future of a nation at a critical crossroads between a cherished past and a lucrative future...