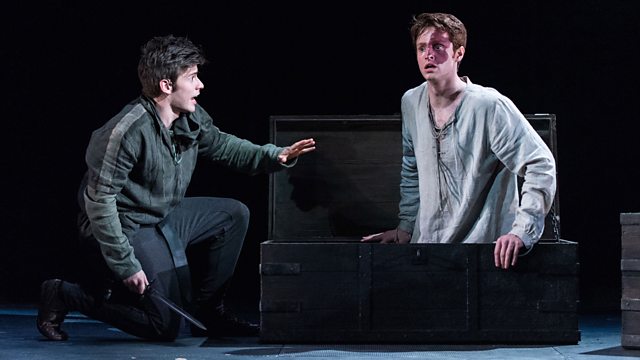 Saturday Review with Tom Sutcliffe Comes From Edinburgh, Offering a Selection of the Best of the Festivals

Saturday Review comes from the 2014 Edinburgh Festivals:
National Theatre of Scotland's production of a new history play looking at the Scottish Stuart kings - we've been to see James II.
Front is a multilingual, multi sensory theatrical experience telling the stories of the First World War. Marion Cotillard's new film, directed by The Dardennes brothers is Two Days One Night; in order to try and save her own job, a woman has to persuade her work colleagues to forgo their annual bonus.
The shameful history of colonisation and racial exploitation is explored in Exhibit B, a 'show' that has caused consternation and extreme - sometimes physical - reactions amongst those who have visited it.
Sarah Waters' new novel The Paying Guests is set in 1920s London when a mother and daughter who find themselves in reduced circumstances, take in tenants leading to complicated repercussions.

James II: Day of the Innocents

Written by Rona Munro, The James Plays transfer to the Olivier Theatre, the National Theatre in London from 10 September - 29 October 2014.

Conceived and directed by Brett Bailey, Exhibit B transfers to the Barbican: The Vaults in London from 23-27 September 2014.

Written and directed by Jean-Pierre and Luc Dardenne, Two Days One Night is in cinemas from Friday 22 August, certificate 15.

The Paying Guests by Sarah Waters is published by Virago on 28 August 2014.