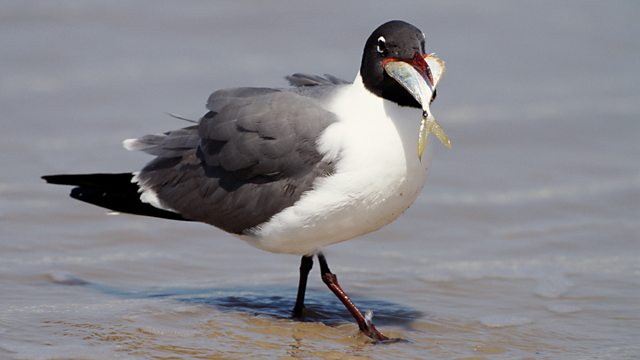 The voices and stories of birds from around the world. Sir David Attenborough presents the laughing gull off the Florida coast.

Sir David Attenborough presents the laughing gull off the Florida coast. In summer, the hearty peal of laughter is one of the characteristic sounds people hear along the North American east coast where laughing gulls come to breed. America's version of the British black-headed gull they are easy to recognise as they patrol the seashore in search for food. Like many gulls they eat what they can find and will scavenge at rubbish dumps, and will even feast on the eggs of horseshoe crabs which spawn in Deleware Bay each spring. Some become swept up in autumnal hurricanes and having crossed the Atlantic, occasionally turn up on a European's bird-watching list.