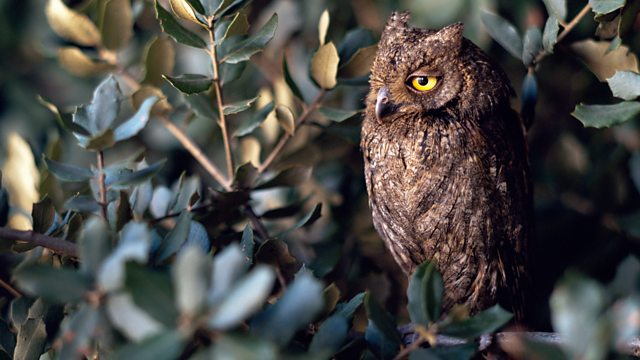 Sir David Attenborough presents the Eurasian scops owl found in Mediterranean regions. In summer a mournful monosyllabic call interrupts the heady scented air of a Greek olive grove at dusk. A male scops owl is proclaiming his territory with a repeated call lasting over 20 minutes. Hearing these tiny owls, no bigger than a starling is one thing, seeing one roosting in an old tree is quite a challenge. They feed mainly on moths and beetles which they hunt for in open country with scattered trees. By autumn these largely nocturnal birds are heading south to sub-Saharan Africa, until the following spring when once again the olive groves resound to their plaintive song.