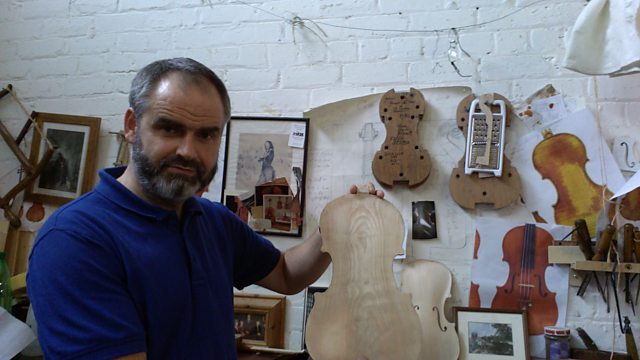 Instrument-maker Steve Burnett tries to make a violin from a branch taken from Craiglockhart, Edinburgh, where WWI officers including Wilfred Owen were treated for shell shock.

Paying tribute to the war poet treated for shell-shock at Craiglockhart, Edinburgh, Steve Burnett hopes to make a new violin from a branch cut down in the grounds only a few months ago.

During the First World War shell-shocked officers were treated at Craiglockhart, an Edinburgh Hydropathic, which became a vital military psychiatric hospital. The poets Wilfred Owen and Siegfried Sassoon were its best-known patients.

Both men, and their visitor Robert Graves, would have walked in the grounds of the hospital and among the trees that still stand there.

A branch of one of these trees, a sycamore, has been taken down, and instrument-maker Steve Burnett will use it to create The Wilfred Owen Violin in memory of the poet's love for language, and to give voice to the wood. The standard preparation of wood for violin-making requires years of seasoning, but Steve has researched old Italian techniques that allow him to use this 'green wood', starting the crafting of the instrument while the wood still feels alive.

As the violin becomes known and used, it will pay tribute to those who were damaged by the war, and give hope that learning about Wilfred Owen's experience and poetry, and the beauty of trees, music and language, will help children towards a peaceful future.