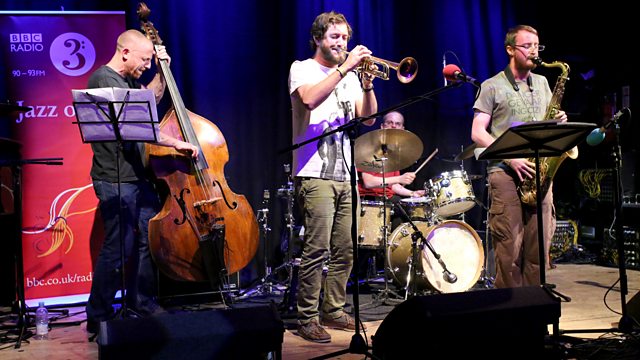 Jez Nelson presents performances by four emerging jazz acts on the BBC Introducing stage at the Band on the Wall club at the 2014 Manchester Jazz Festival.

Some of the UK's brightest emerging jazz musicians converge on the BBC Introducing stage at this year's Manchester Jazz Festival. Hosted by Jez Nelson at the Band on the Wall club, the night features four acts from around the country.

Newcastle based ten-piece Brassy B kick off the party with hard-hitting New Orleans flavours - all the more impressive for the fact that every one of the band members is still in their teens. Manchester guitarist Moss Freed brings his group Moss Project, with cleverly crafted grooves, brilliant solos and the soaring vocals of Alice Zawadzki. Peter Edwards and his London trio tackle classy originals ranging from upbeat swing to catchy modern hooks - plus a touch of Horace Silver on the way. And the intensity runs high into the night as Manchester drummer Johnny Hunter closes the show with his quartet, featuring the thunderous lines of trumpeter Aaron Diaz and tenor-saxophonist Kyran Matthews.

BBC Introducing gives unsigned, undiscovered or under-the-radar bands the chance to upload their music and get it played on BBC radio. The acts featured in this programme were selected to appear at the Manchester Jazz Festival by Jez Nelson, Kevin Le Gendre and BBC 6 Music's Stuart Maconie.

Loop Collective at Jazz in the Round