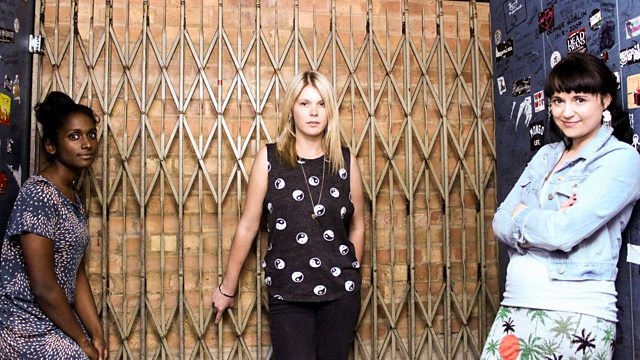 15 Minute Drama Queens of Noise: Get It On
Episode 1 of 5

All-girl band Velveteens sign their first record deal. Are they destined to flop or be Top of the Pops? Stars Samantha Robinson.

It's 1989. All-girl band Velveteens are high on champagne and excitement as they sign their first record deal. Are they on the road to be wannabe flops or Top of the Pops?

Music industry veterans Louise Wener and Roy Boulter draw on their experiences to tell the story of a young band about to get their big break.

Back in 2012, BBC Radio 2 broadcast a pilot music drama 'Shout to the Top', the brainchild of the station's Head of Music, Jeff Smith. Writers Roy Boulter (drummer with The Farm) and Louise Wener (ex-Sleeper) came on board to ensure that the drama was founded on a genuine knowledge of the music business. Taking care of the music were successful producers Brian Rawling (Bowie, Kylie, Cher, Craig David, One Direction and more) and Marky Bates (Faithless, Dido).

And so were born Velveteens, an all-girl band desperate to make it in the days before the digital revolution changed the music business forever.

Migrating to BBC Radio 4, this series picks up the story as the band signs to a major record company. Now sharing a flat and with only pennies in their pockets, the three young band members embark on a roller coaster ride on the road to who-knows-where. Calling the shots is their new manager, Sam Shephurst.

Episode 2—Queens of Noise: Get It On