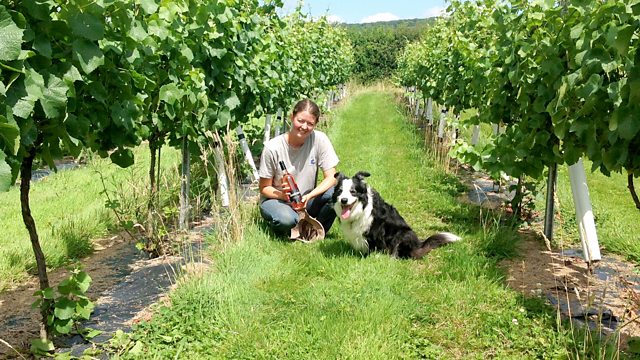 English and Welsh wines appear to be on the up and up. Sheila Dillon goes to the vineyards to investigate.

English and Welsh wines are on the up and up, as Sheila Dillon investigates.

Wine production is well known as a risky investment, not least because it is so dependent on the weather. Many UK growers were hit very hard by the terrible summer of 2012. One of our most well known brands, Nyetimber, completely abandoned their harvest for that year. Establishing a vineyard also requires a big capital investment; one adage used to be that if you wanted to make a moderate amount of money the way to do it would be to have a large amount of money and then plant a vineyard. This may be part of the reason why the wine produced in England and Wales accounts for less than 1% of that consumed here.

Despite all of this, the acreage of vineyards in England has doubled in the last 7 years and there are some producers aiming to produce an unheard of million bottles a year. Perhaps more importantly, mentioning English or Welsh wine at a dinner table is no longer likely to attract sniggers of derision. In fact our wine production is now synonymous with quality. As UK wine producers big and small are growing in confidence, Sheila Dillon asks how they can assure their future in a risk laden business, where they are still one of the smallest players on the global market.