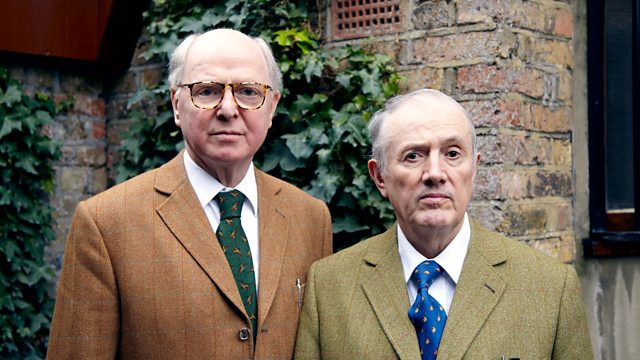 Artistic duo Gilbert and George on their new exhibition, Scapegoating Pictures, and why they think religion should be banned.

Artistic duo Gilbert & George on their provocative exhibition, Scapegoating Pictures, and why they think religion should be banned.

Author and Coronation Street writer Jonathan Harvey on his new novel, The Girl Who Just Appeared, set amidst the searing tension of the Toxteth Riots.

As the Chichester Festival Theatre prepares to re-open its doors tonight after a £22m refurbishment - with Rupert Everett in Amadeus - the theatre's Artistic Director Jonathan Church and architect Steve Tompkins discuss their vision for the 1960s brutalist concrete hexagon.

And why a new 'memoir' about Harper Lee has forced the famously reclusive author back in to the public limelight.

The Girl Who Just Appeared written by Jonathan Harvey is published by Pan.

Gilbert & George: SCAPEGOATING PICTURES for London is on at White Cube, North Galleries and South Galleries, Bermondsey from Friday 18 July until Sunday 28 September 2014.