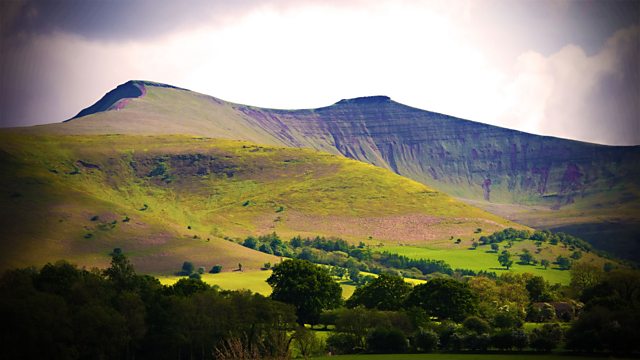 Gone to Earth
Episode 1 of 2

Horatio Clare sets out to walk the infantry training route known as the Fan Dance, so called because it goes over Pen y Fan, the highest peak in southern Britain.

Infantry soldiers are trained, challenged and shaped by the Brecon Beacons. Horatio Clare walks with former soldiers to see the Welsh mountains through their eyes.

For decades the Brecon Beacons in South Wales have played an important part in British Army infantry training. Soldiers have walked, crawled, run, taken cover, got cold and wet, cursed and been shaped by the terrain of the Brecon Beacons. Writer Horatio Clare, who grew up in the Beacons, meets former infantry soldiers to explore their unique and lasting relationship with this landscape.

1. The Fan Dance: Horatio sets out to walk the infantry training route known as The Fan Dance, so called because it takes you over Pen y Fan, the highest peak in southern Britain. He's joined in the hills by former Parachute Regiment officers Adam Dawson and Evan Fuery and by Ed Butler who commanded British Forces in Afghanistan in 2006. The three soldiers talk about their deep physical and psychological connection with these upland border landscapes and the fact that, wherever they have served, wherever they're from originally, the Brecon Beacons become 'home'.

Horatio also gets first-hand experience of infantry endurance training and skills from Steve Rees, a former Royal Marine physical training and outdoor pursuits instructor. As he shoulders a 55 pound bergen - the military term for a rucksack - and Steve puts him through his paces, Horatio experiences first-hand a soldier's focused, exhausting, exhilarating intimacy with the landscape. He discovers how to turn it to your advantage and use it as cover; and what you see and know if it as you move invisibly through it, gone to earth.

See all episodes from Gone to Earth