BBC Two
Shopgirls: The True Story of Life Behind the Counter
Main content 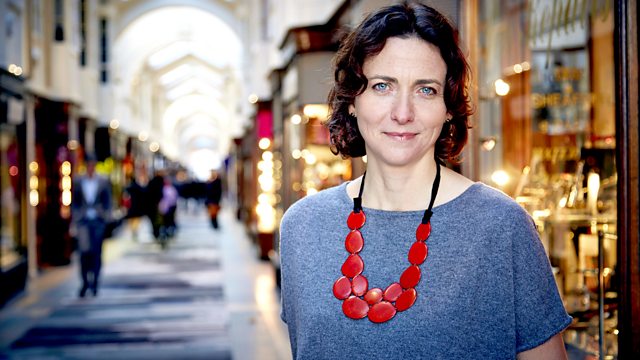 Shopgirls: The True Story of Life Behind the Counter
Episode 1 of 3

Dr Pamela Cox charts the history of the shopgirl. She begins in the mid-19th century, when shops were owned and staffed by men.

Today, it is taken for granted that many shop assistants are women, but 150 years ago, being served by a shopgirl was a strange new phenomenon, and the story of how an army of women swept on to shop floors is a fascinating one.

Dr Pamela Cox presents this three-part series following the journey of the shopgirl from an almost invisible figure in stark Victorian stores, to being the beating heart of modern shops. With retail the biggest private sector employer in the UK today, this series charts how shopgirls have been central to Britain's retail revolution and at the cutting edge of social change.

Pamela begins in the mid-19th century, when shops up and down the country were owned and staffed by men, and shop work was a closed world for most women. A new, emerging middle class had money to spend, but the idea of shopping as a pleasurable experience was still a world away.
As jobs opened in factories, shops no longer had the same ready supply of young male apprentices, and groups actively sought to promote women's employment and shrug off the notion that shop work was somehow 'unladylike'.

The Victorians became consummate shoppers and the experience of shopping became more attuned to the demands of female customers who preferred being served by women. By the late 19th century, the doors to shops across the country were flung open and thousands of women poured in looking for work. Pamela lifts the lid on the working conditions and realities of life for shopgirls, many of whom 'lived in' above the shops and new department stores.

By the turn of the century, nearly a quarter of a million women were employed in shop work. They had forged new kinds of work for women and even helped transform the experience of shopping itself. The shopgirl was here to stay.

Revolution on the Floor

See all episodes from Shopgirls: The True Story of Life Behind the Counter

See all clips from Here Come the Girls (2)