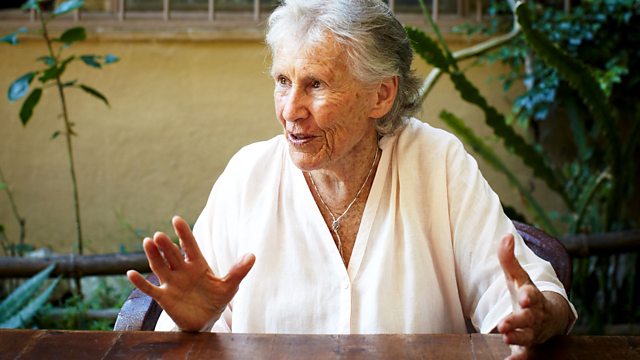 Mexican cooking and the food adventures of Diana Kennedy

Dan Saladino meets the world authority on the food of Mexico, British-born writer Diana Kennedy. She has spent six decades travelling, in search of lost ingredients and recipes.

Diana Kennedy's life reads like an adventure story. Born in Loughton, Essex in 1923, after serving in the land army she set off on a journey that would take her to Canada, Jamaica and Puerto Rico. She stopped off in Haiti, met the New York Times correspondent Paul Kennedy, fell in love and they moved to Mexico.

Soon after arriving she became fascinated by Mexican food. A maid looking after the home was also a cook and the regional dishes made Diana Kennedy curious about the ingredients and recipes of other regions of Mexico.

After Paul Kennedy died in 1966 Diana found herself living in New York, with no income and an uncertain future. The Food Editor of The New York Times, Craig Claiborne encouraged her to use her knowledge of Mexican food and give cooking lessons.

To research recipes and find ingredients she'd travel to remote parts of Mexico, into villages, to markets and into kitchens with domestic cooks to learn more about traditional foods. That research has continued for five decades.

It has produced nine books, and a body of work that is now regarded as the most
authoritative account of Mexico's cuisines ever created. In the programme Diana Kennedy explains her life in food.

In the programme food writer and editor of Swallow magazine, James Casey visits Diana Kennedy in her home in Michoacan to see how she's also created a garden containing varieties of fruit and vegetables from all over Mexico.

Sweeteners: The answer to our sugar cravings?

Food and the Curriculum