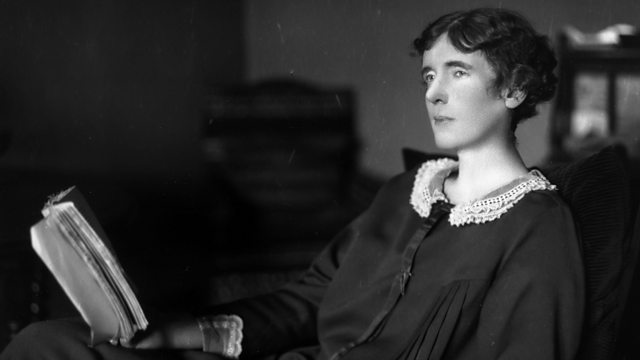 Author and broadcaster Sara LeFanu reflects on Rose Macaulay's 1916 novel Non-Combatants and Others, considering how it sheds light on Macaulay's own changing attitude to the war.

2.Sarah LeFanu reflects on Rose Macaulay's 1916 novel, Non-Combatants and Others

Rose Macaulay is perhaps best remembered for her final novel, The Towers of Trebizond, but her biographer, Sarah LeFanu, has long believed that one of her earlier novels, Non-Combatants and Others, is a work of striking originality. She also argues for its importance to our understanding of the impact of the First World War not only on soldiers at the front but on the entire nation.

The books which have become the foundational texts of our perception and understanding of the war are all by men who had served as soldiers - Edmund Blunden, Siegfried Sassoon, Robert Graves - but all were written more than a decade later, when their authors had had time to shape and mediate their experiences through a process of post-war reflections.

The immediacy of Non-Combatants and Others - written and set in 1915 - is another reason for its claim to be regarded as a key text of the war.

Sarah LeFanu brings the novel alive by interweaving a re-telling of its story with her reflections on how it sheds light on Macaulay's own changing attitude to the war, and her later commitment to the League of Nations Union and the Peace Pledge Union.

Paths of Glory—Minds at War: Series 1