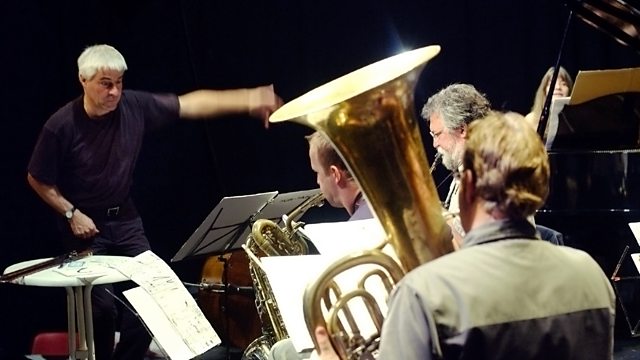 Jez Nelson presents a concert given at London's Cafe Oto by British bassist and composer Barry Guy with his twelve-piece New Orchestra.

Known for his adventurous and demanding writing, Barry Guy's music is highly scored, yet unpredictable in nature - unusual instrumental techniques, sharp-turning textures and thunderous bursts can unhinge the music at any given moment. In controlled sections of improvisation, the composer exploits the talents of experienced free players within the band, including saxophonist Evan Parker and pianist Agusti Fernandez, whilst the Baroque violin of Maya Homburger adds a contemporary classical flavour to the performance.

Here in concert at London's Cafe Oto, the New Orchestra perform brand new material, including pieces featuring smaller groupings of players from within the ensemble.

Highlights from the 2014 Emulsion Festival

As performed by Barry Guy and Maya Homburger

In the Jazz on 3 recording truck