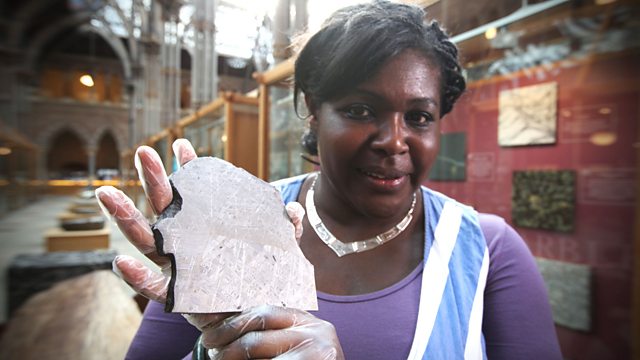 The team looks at the cosmic impacts which have shaped the universe around us, from asteroids crashing into the surface of the moon to galaxies colliding with each other.

From asteroids crashing into the surface of the moon to galaxies colliding with each other, cosmic impacts have shaped the universe around us. Materials scientist Mark Miodownik investigates the astonishing physics of the moment when a meteorite hits a planet like our own. And the team is asking for viewers' help to spot asteroids that could be on a collision course with Earth.

Maggie Aderin-Pocock discovers how evidence suggests the moon was formed from the biggest impact in Earth's history, an impact so powerful the whole surface of the Earth melted. Chris Lintott explores the creative power of impacts on the biggest scales, when whole galaxies collide. Pete Lawrence takes us on a tour of the moon, revealing the beautiful range of impact craters available for us all to see almost every night.

How Gravity Shapes the Universe

See all clips from Impacts (3)

The asteroid hunt is up and running. Take part to discover objects that have never been observed before by searching for Near Earth Asteroids that could collide with our planet.