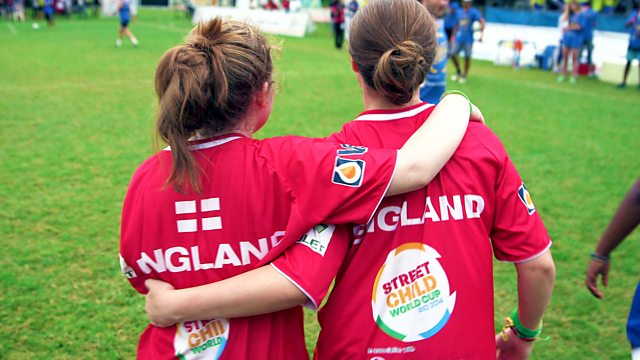 Series following a group of teenage girls from London who were all brought up in care as they embark on a journey of a lifetime to Brazil and take part in a football tournament.

Forget the official World Cup, this series follows the real Team England as they embark on a journey of a lifetime to Brazil. But there is no Rooney or Crouch on this team, it's a group of teenage girls from London who were all brought up in care.

They take part in a football tournament that really could make a difference. The Street Child World Cup is made up of the most excluded young people from around the globe - teenagers from the streets or broken homes.

In the first of this two-part series, we join Team England at home as they don their football boots for the first time and prepare to represent their country, but after their challenging pasts, confidence and commitment don't come easy. Some are struggling to keep motivated and finish their education, others find it hard to cope with pressure and flare up in the face of defeat. But coming together as a team, united by their tough backgrounds, we see the challenges they overcome and highlight the resilience of these extraordinary young women.

However, the football games are just the start - through their journey we get an idea of what life is like for teenagers in care on the brink of adulthood. By following the girls as they head to Brazil we discover what life is like for street kids from other countries, like the millions of poor young Brazilians who live in the favelas and slums of cities like Rio. We see how meeting and competing against teens with tough pasts affects the girls and then, back in the UK, see if the whole experience inspires them to change their lives.