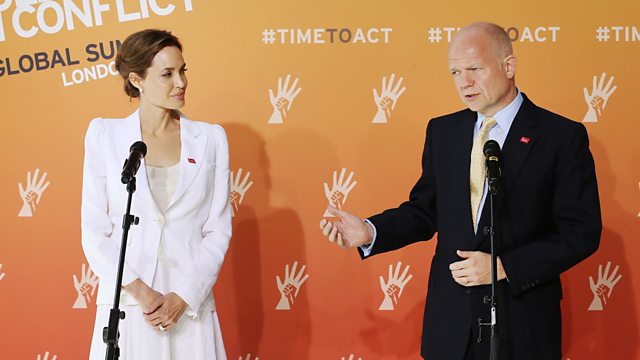 Angelina Jolie and William Hague on ending sexual violence in conflict, and Gugu Mbatha Raw on her new film, Belle. Plus manuals for men with Tim Dowling and workplace stress.

Angelina Jolie on why she is working alongside the British government to end the use of sexual violence and rape in war. And Angela Atim on her experience at the hands of The Lord's Resistance Army in Uganda and asking for justice for survivors.

The actress Gugu Mbatha Raw on her role as an illegitimate mixed raced woman brought up in an aristocratic family in the 18th Century in the film Belle .

We discuss the increase in the number of advice manuals written by men for men - with Guardian writer Tim Dowling, Journalist Jay Haynes and author Dean Beaumont.
We discuss workplace stress with a woman who suffered panic attacks at work and an occupational psychologist, Dr Almuth McDowell.

The Global Summit to End Sexual Violence in Conflict

In a special broadcast of Woman's Hour, Jenni speaks to UN Special Envoy Angelina Jolie and Foreign Secretary William Hague, live from the Global Summit to End Sexual Violence In Conflict. She also interviews Angela Atim, one of the speakers at the conference, who was kidnapped as a 14-year-old schoolgirl by Lord's Resistance Army (LRA) rebels in Uganda.

Belle, which opens on Friday, is a film about an illegitimate mixed-race woman who is brought up in an aristocratic family in 18th Century Britain.  It is based on the true story of a childless aristocrat’s decision to adopt his great-niece, Elizabeth Dido Lindsay, whose mother was a slave. Joining Jane to discuss are Gugu Mbatha Raw, who plays the title role, and historian James Walvin.

A new breed of book is becoming increasingly popular: advice manuals written by men for men.  Their aim: to instruct the male of the species on how to be a good parent, how to be the best husband, what to do when your wife gives birth.  So what kind of advice do men need?  How do men like to receive information?  How necessary is it to dress up helpful hints and facts with humour or is it better to disguise them altogether as though they are a car or army training manual?  Journalist Tim Dowling,  DaddyNatal teacher Dean Beaumont and J. Haynes Chair of Haynes Manuals discuss.

Tim Dowling, How to be a Husband was published on 5th June 2014 by Fourth Estate.

Nearly half a million people in the UK believe that they have work-related stress at a level that is making them ill.  Undue pressures and demands at work because of workload, deadlines, the environment you work in or your colleagues can lead to critical levels of stress. And yet work-related stress is the elephant in the room in many workplaces. The charity Mind believes that stressed workers are suffering in silence and employers aren’t doing enough to tackle stress. A third of workers polled by the charity said that they would not be able to talk openly to their line manager if they felt stressed.

From casual conversations, to psychological support, knowing how to deal with the everyday strains of your job is important. Jenni speaks to Sarah Mitchell who suffered repeated panic attacks at work and to occupational therapist Dr Almuth McDowell about why so many of us are suffering in silence.

The World Cup is upon us – so for many long suffering partners of football fans that probably means weeks of eating dinner sat on the sofa, alongside your other half who has his eyes glued to the match. It’s not just men who go mad for the tournament though – there’s a number of women who love the World Cup and follow football fanatically throughout the year. One of them is Liz Heade, whose bookBobby Moore to Thierry Henry: A Girl’s Own Story charts her life through various World Cups – including her break-up with her husband after, in her words, “he got tired of watching me watching football”. Liz joins Jenni alongside Jo Tongue, the Editor of 606 the football phone-in on BBC Radio 5 Live, to discuss what it’s like to be female and football obsessed in 2014.

You can apply for tickets to be part of the audience of a special edition of Woman's Hour at this summer's Commonwealth Games in Glasgow.

Hailed as an icon of underground music across the Arab world, and described by Rolling Stone magazine as ‘The Bedouin Lady Gaga’, Lebanese born Yasmine Hamdan’s music is an elegant blend of Middle Eastern soul and electro folk pop rhythms. She will be live on the programme to sing ‘Samar’ from her new album Ya Nass, and to speak about her musical inspirations, which range from PJ Harvey to the legendary Syrian vocalist Asmahan.