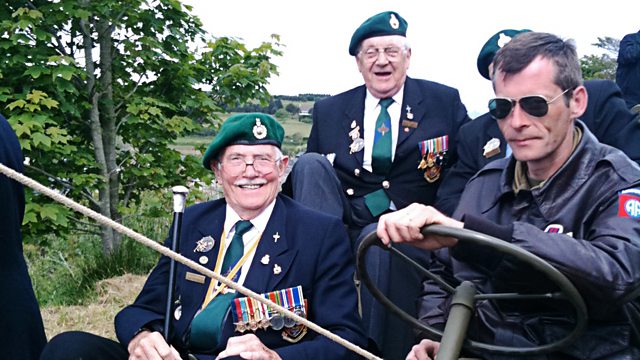 For the 70th anniversary of the D-Day landings, Paddy O'Connell meets veterans who served with his father and asks, 'What is remembrance?'.

As the Queen and Prince Philip travel to Normandy to commemorate the seventieth anniversary of the D Day landings, Paddy O'Connell meets veterans who served with his father and asks 'what is remembrance'?

Paddy's father died when he was eleven. When he started looking for his history, he tracked down several men who had fought with him during the war.

47 Royal Marine Commando was one unit among 156000 troops landing at Normandy on D Day. Their plan failed at once. They were tipped into the sea, losing all their kit, and were forced to continue with weapons seized from the enemy. Enduring a twelve mile march, they succeeded against the odds in their mission to capture a fishing port.

It was only in the 1980s as they started to retire that the men from 47 Royal Commando began going back to Normandy. Annual commemorations at the cemeteries are only part of the reason. For these men, now aged around 90, living life to the full is the best remembrance. The men who died as teenagers gave up their youth and their future so that life could be lived and enjoyed.

Paddy has shared significant time with them over the last five years; at memorial services in Normandy, at social events and dances with their families. In this programme we listen to those conversations and we hear what Paddy has learnt about remembrance and how he's changed his mind about what it means.