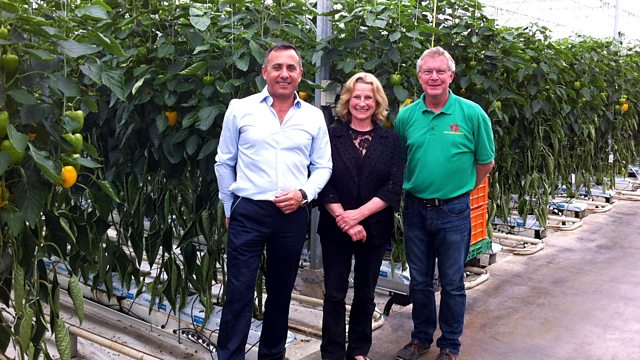 The Lea Valley's proximity to London made it a hub for growing salad vegetables under glass. Anna Hill finds out how our peppers are produced and our taste for new types.

Over the last century the Lea Valley near Essex has become a hub for growing under glass and producing home grown salad vegetables. We still import the vast majority but there is increasing demand for British produce but the green belt and competition for land has meant expansion has been difficult. After a three year fight Valley Grown Nurseries has just won planning permission to create a new taller glasshouse over 21 acres.

Anna Hill visits their current operation near Harlow in Essex to see how our peppers are carefully grown to achieve the required uniform shape and size. Grower Gary Turner tells her about our taste for new varieties and how experiments using LED lights could change how much is produced.

The family company is run by Vince Russo, along with his brother, having been founded by their parents and they now source and pack millions of tonnes of produce from 17 other growers nearby. He explains why many Sicilian families came to the area and recognised the future in growing salad vegetables under glass.