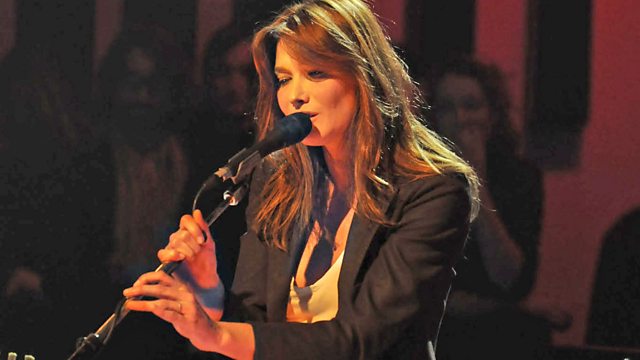 Former First Lady of France and singer-songwriter Carla Bruni tells her musical story, plays her favourite songs and celebrates the music of Paris.

Former First Lady of France and singer songwriter Carla Bruni presents the second of three programmes where she tells her musical story, plays her favourite songs and celebrates the music of Paris.

In Little French Song, Carla insists that France has a lot to be proud of musically. "I was talking about the impact or impression that French songs will give to the rest of the world." Carla celebrates the emotional complexities of the French song. This is music from the heart with strong narratives, drawing from elements of poetry. Performed live, French songs create a bond where the audience often feel privy to the artist's life; such is the confessional nature of this music.

She recalls seeing Serge Gainsbourg every night during his residency at the Casino de Paris, where he fell down stairs with the help of a stunt double.

Carla also plays some of her own music, including Dolce Francia, her Italian version of Charles Trenet's Douce France and her cover of the rare Serge Gainsbourg song La Noyee.

With the writer Norman Lebrecht.

See all episodes from Carla Bruni's Postcards from Paris