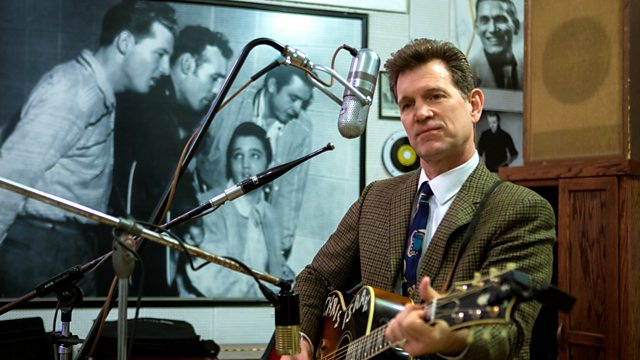 Scotty Moore and the Guitar That Changed the World

Scotty Moore was Elvis Presley's right hand man on stage and in the studio. Chris Isaak heads to Memphis to find out about the man who played on more hits than any other guitarist.

Scotty Moore was Elvis Presley's right hand man on stage and in the studio.

As part of the most amazing musical adventure of modern times Scotty pioneered the role of guitar in pop music with searing solos that inspired and influenced generations of guitar heroes.

To mark the 60th anniversary of the first time that Scotty recorded with Elvis at the legendary Sun Studios in Memphis, Chris Isaak - who has been a fan of Elvis's singing and Scotty's playing since he bought his first Sun Records single - journeyed to Memphis to meet Scotty and find out more about the man who has played on more hits than any other guitarist.

Back in the studio where the Elvis legend began, Scotty tells Chris how he and bass payer Bill Black recorded the song 'That's All Right' with Elvis in 1954 and unwittingly sparked a revolution that changed music forever. As well as being Elvis's guitarist Scotty was also his first manager and was with Elvis every step of the way as his career flourished. While Elvis's vocal style was a combination of hillbilly howling laced with gospel, Scotty's guitar playing combined jazz, blues and country to create a prototype for all rock guitar that followed.

Scotty played guitar on all of Elvis's iconic hits including 'Heartbreak Hotel', 'Blue Suede Shoes', 'Don't Be Cruel', 'Hound Dog', 'Jailhouse Rock', 'All Shook Up' - and dozens of others.

Scotty's was highly influential both in his style of playing and the fact that he became the first rock 'n' roll lead guitarist. In the 50's artistes like Ike Turner, Chuck Berry, Bo Diddley and BB King played their own lead guitar parts, but Elvis left lead duties to Scotty, who became an inspiration to countless guitarists that followed.
As The Rolling Stone's Keith Richards explains to Chris in this programme, "Everyone else wanted to be Elvis, I wanted to be Scotty.".