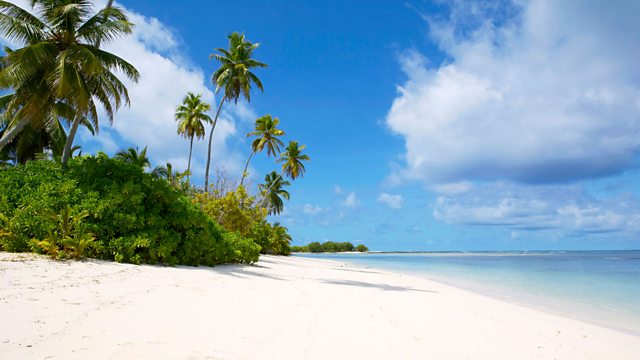 Dylan Thomas: The Beach of Falesa

Dramatisation of an unfilmed screenplay by Dylan Thomas about a man's quest to uncover the secret of the bizarre happenings he finds on a Pacific island. With Matthew Rhys.

World premiere of an unfilmed screenplay by Dylan Thomas, newly adapted for radio for the centenary of his birth, and narrated as a 'Film for Voices' by Matthew Rhys.

Wiltshire arrives on an unnamed Pacific island hoping to trade in copra. But an encounter with rival trader Case leads to a macabre wedding. Shunned by the locals, Wiltshire sets out to uncover the secret behind Case's mysterious hold over the islanders, and the truth in the tales of the singing devils living deep in the bush.

Dylan Thomas adapted the short story of the same title by Robert Louis Stevenson to create this screenplay but it was never filmed, despite interest from Richard Burton. So this radio adaptation for the centenary of his birth is the world premiere of a work that blends some of the wordplay of Under Milk Wood with the brooding mystery of Heart of Darkness.

Producer Alison Hindell came across The Beach of Falesa when her stepdaughter moved into a new house in Sydney and found the published edition of the text amongst the remnants left behind by the previous owner.

Alison Hindell has previously directed for Radio 4 both Under Milk Wood (which combined the archive recording of Burton as First Voice with a new cast) and The Art of Conversation, another Thomas premiere, being a previously unbroadcast radio script written during the war.

A BBC Cymru Wales production.
First broadcast in May 2014.