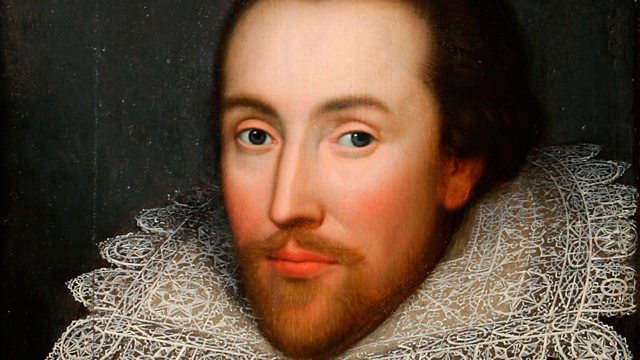 Texts and music inspired by Shakespeare, with readings by Rory Kinnear and Adjoa Andoh. With Eliot, Plath, Hardy and Joyce, plus music by Sibelius, Purcell and Barber.

This week’s programme features words and music inspired by Shakespeare as part of Radio 3’s celebration of the playwright’s birth.

The readers are Rory Kinnear and Anjoa Andoh. Rory has recently finished his very successful run at the National Theatre where he played Iago to Adrian Lester’s Othello, a role for which he has just won an Olivier Award, four years after his award winning role as Hamlet, also at the National. Anjo’s most recent Shakespearean role was Portia in the RSC’s World Shakespeare Festival production.

We begin with Purcell's Prelude to ‘The Fairy Queen’, his 1691 opera inspired by Shakespeare’s ‘A Midsummer Night’s Dream’ heard with the opening of Thomas Hardy’s poem written to celebrate the 300th anniversary of Shakespeare’s birth. In the poem he describes Shakespeare as ‘Bright baffling soul, least capturable of themes’ and Hardy’s work contains many Shakespearean echoes. In ‘Tess of the D’Urbervilles’ Tess is seen as ‘one character alone in the landscape’ reminding the reader of King Lear. The character of Michael Henchard in ‘The Mayor of Casterbridge’ also resembles Lear in the disaster that befalls him after an impetuous decision.

Carol Ann Duffy’s ‘Anne Hathaway’ from her collection ‘The World’s Wife’ was inspired by Shakespeare’s will which bequeathed to his wife ‘my second best bed’. And, later in the programme, you’ll also hear Rory Kinnear read Carol Ann Duffy’s poem, ‘Shakespeare’, commissioned by the Royal Shakespeare Company.

Two Wainwrights, father and son Loudon and Rufus, appear in the programme. Rufus Wainwright sings his own setting of Shakespeare’s sonnet ‘ When in disgrace with fortune in men’s eyes’ and Loudon Wainwright III sings his musical reimagining of Prince Hal’s dissolute life with Falstaff in the London taverns.

Michael Longley’s mysterious poem ‘Fleance’, inspired by the character from ‘Macbeth’, can be read as an exploration of the Troubles in Northern Ireland. Here, Fleance escapes his father’s fate by hiding under the stage in a production of the play: life and art are intertwined as a paramilitary’s bullet kills Banquo instead of Shakespeare’s dagger.

The final sequence is a selection of musical and poetic reworkings of Shakespeare’s ‘The Tempest’. Tippett’s ‘Come unto these yellow sands’ from his ‘Songs for Ariel’ and Frank Martin’s ‘Full Fathom Five’ are heard alongside Sylvia Plath’s ‘Full Fathom Five’ and a passage from James Joyce’s novel ‘Ulysses’ in which Stephen Dedalus, often seen as Joyce’s Hamlet, walks along the shore where the rhythm of the waves returns him to memories of a drowned man in the bay. His language, never far from Shakespeare, echoes Ariel’s Song. Thisinterior monologue is heard alongside the Berceuse and Ariel’s Song from Sibelius’ ‘The Tempest’. As a reviewer at the time wrote, ‘Shakespeare and Sibelius, these two geniuses, have finally found one another’.