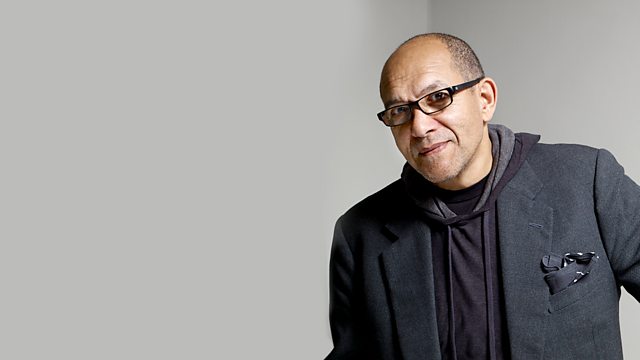 Anita Anand and Andrea Catherwood are joined by British designer Bruce Oldfield OBE, best known for his couture and bridalwear designs. Tom Mackenzie recalls his experiences as the last child to be admitted to the Foundling Hospital, a charity run on strict Victorian values that brought up children born outside marriage. Lynne Moore is an war artist who was embedded with the British Forces in Helmund, Hannah Rochell writes the En Brogue blog describing the joys of wearing brogues. Plus JP Devlin has a hot encounter with Jethro Tull's Ian Anderson and author Helen Fielding shares her Inheritance Tracks. And two men from Birmingham, Jon Bounds and Danny Smith tell us about their mission to visit all 56 seaside piers in England and Wales in just two weeks.

Bruce Oldfield is a British designer best known for his couture and bridalwear designs. His client list spans generations - from icons including the late Diana, Princess of Wales and Queen Rania of Jordan to Jemima Khan, Sienna Miller and Rihanna. He was raised and educated by Barnardo's, the British charity which cares for vulnerable children and young people and he’s a passionate advocate for their work.

Lynne Moore is an artist with a passion for extremes of landscape and climate but in 2012 she was embedded with the British Forces in Afghanistan as a war artist.

Lynne's paintings will be on display at the Cavalry and Guards Club in Piccadilly, London between 28 - 30 April.

Tom MacKenzie was one of the last children to be admitted to, and to leave, the Foundling Hospital.

The Last Foundling by Tom MacKenzie is published by Pan.

Two hundred years after the first British pier was built Jon Bounds and Danny Smith went on a road trip visiting all 56 pleasure piers in the UK.

They’ve written a book about their experience called Pier Review.

From brogues to boots, pumps to penny loafers, sneakers to sandals. Hannah Rochell, features editor at fashion magazine InStyle, tells us about her favourite comfortable footwear.

Bridget Jones’ author Helen Fielding chooses 'Climb Every Mountain' from the Sound of Music and Diana’s Krall’s version of 'Pick Yourself Up'.