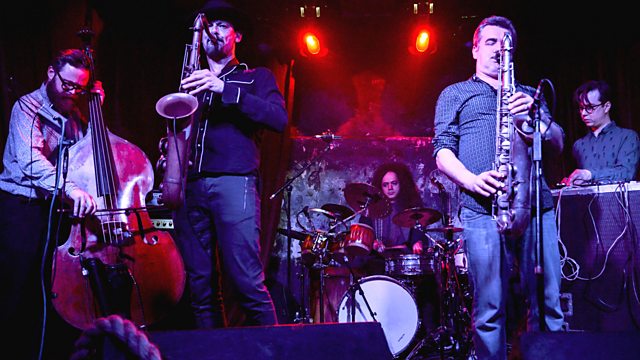 Jez Nelson presents a concert given at London's XOYO in which Seb Rochford's five-piece band Polar Bear perform new music from their album Each and Every One.

Iconoclastic five-piece Polar Bear perform new music from their album Each and Every One, in concert at London's XOYO.

Led by drummer Sebastian Rochford, Polar Bear have been central to the
British experimental scene for the past decade, with their unique brand of genre-bending post-jazz. On previous outings their sound has embraced everything from punk to hip hop, however their latest record sees a shift to more intense and expansive territory - with warm electronic flavours seamlessly integrated at the heart of the music. Twisting, long-form compositions come to life through the saxophone melodies of Mark Lockheart and Peter Wareham, whilst electronics whiz Leafcutter John, bassist Tom Herbert and Rochford anchor the sound in hypnotic rhythms.

Also in the programme, journalist Marcus O'Dair explores how electronic music and production are shaping the structure of jazz today.