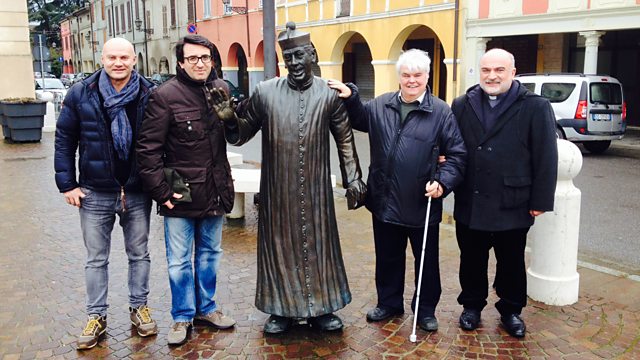 Peter White goes in search of one of his childhood's favourite comic heroes, the buffoonish figure of Don Camillo. Whilst at the National Blind School, Peter lapped up the braille books that described the antics of this angry Italian Catholic priest who was always pitted against Peppone, the Communist mayor.

Peter discovers that the author Giovannino Guareschi's comic creations provide a fascinating road map to the bitter rivalries and huge political instability of post-war Italy. This was a time when the battle-scarred country was recovering from 20 years of Mussolini's fascism, from Nazi occupation, and the Allied campaign to seize the country. The internationally popular Don Camillo books are a snapshot of the early Cold War years when the Communist Party was riding high, and entirely at odds with the conservatism of the Catholic church.

Meeting Guareschi's descendants, Italian satirists today, a publisher and academics, Peter discovers that the short stories he so enjoyed as a teenager unlock a passionate and pivotal time in Italy's history. Arrested and imprisoned by three different successive regimes, first by Mussolini, then made a POW by the Nazis, only to fall foul of the post-war Christian Democrat government, we'll hear that Guareschi continued to hone his satire, always using humour to poke fun at authority, in whatever shape or form it presented itself. He certainly knew how to make life hard for himself, but nearly 50 years after his death Guareschi's characters live on: the Don Camillo films remain a staple of Italian television. But, Peter asks, do the antics and rivalries of Don Camillo and Peppone still speak to us today, and if so, what do they tell us?