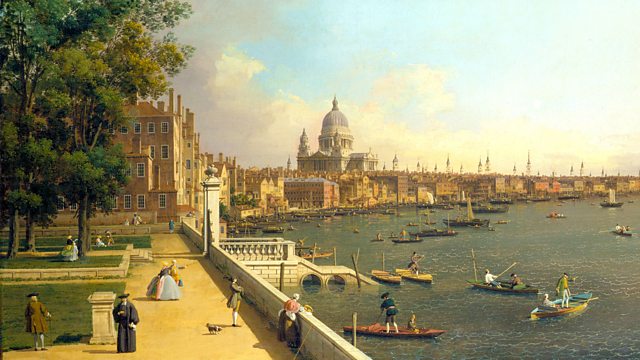 If Mrs Thatcher thought she was living again through Victorian England, we are now living through the eighteenth century. This special edition of Free Thinking explores London as the centre of the world then and now, financial bubbles bursting then and now, and the lust for consumption then and now, whether of bodies or bodices.

Philip Dodd brings together the MP and author Kwasi Kwarteng, historians Helen Berry, Jerry White and AN Wilson and playwright April De Angelis for a discussion which is part of BBC Radio 3's eighteenth century season of programming .

Kwasi Kwarteng's books include Ghosts of Empire and War and Gold
AN Wilson is a newspaper columnist and the author of London A Short History and a series of histories of England including Our Times.
Helen Berry is Professor of British History at Newcastle University and the author of The Castrato and His Wife.
Jerry White has spent 15 years writing a trilogy of books about London including his most recent London In The Eighteenth Century. He is Visiting Professor of London History at Birkbeck, The University of London.
April De Angelis has written plays including Jumpy, Gastronauts, Catch and A Laughing Matter.