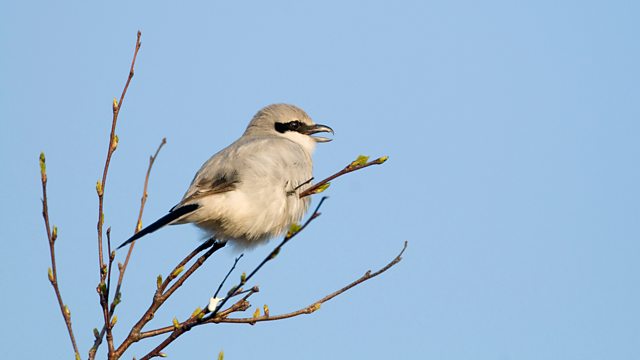 Kate Humble presents the great grey shrike. Great grey shrikes feed on small birds, which they can catch in flight. They also eat mice, voles and shrews and, as spring approaches, they'll include bees and larger beetles in their diet. Shrikes are also known as "butcher birds" because of their habit of impaling their prey on thorns, just as a butcher hangs his meat on hooks.

Recording sourced from The Macaulay Library at the Cornell Lab of Ornithology.

This programme contains an audio recording of the Great Grey Shrike which was kindly provided by The Macaulay Library at the Cornell Lab of Ornithology.

Source credit: ML130991: The Macaulay Library at the Cornell Lab of Ornithology, recorded by Gerrit Vyn on 07 Jun 2006.