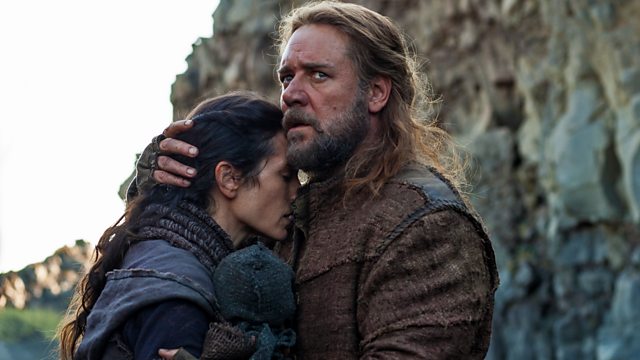 Arts news, interviews and reviews with John Wilson, including a review of Noah, author Rachel Seiffert, artist Phyllida Barlow and the launch of the new Royal Opera House season.

Director Darren Aronofsky's latest film, Noah, is a contemporary take on the Hollywood biblical epic - starring Russell Crowe as the Old Testament patriarch who organises the construction of a vast ship, and Anthony Hopkins as his grandfather, Methuselah. However, Aronofsky's Noah is no saint, but a flawed husband and father. Briony Hanson, the British Council's Director of Film, reviews.

Rachel Seiffert's latest novel, The Walk Home, looks at sectarian tensions in Glasgow through the eyes of Stevie, a young worker on a building site, and - a generation back - Lindsey, his Irish mother who left her family to run her own life and Stevie's uncle Eric, who ran away for love. Rachel herself is half-German, and talks to John about family tensions.

Alex Beard discusses his first season launch in his role as Chief Executive of the Royal Opera House. Having spent six months in the role he discusses creative plans - which includes seven opera and ballet world premieres - and the challenges that lie ahead.

The sculptor Phyllida Barlow shows John Wilson her latest work, dock 2014, which has been commissioned for the Tate Britain's Duveen Galleries. The artwork is made up of seven different sculptures and is inspired by the Tate's location by the river Thames. Phyllida Barlow discusses creating vast sculptures from everyday materials and directing a team of expert riggers to install her work.

The Royal Opera House new season has been announced, from Monday 1 September 2014 until Monday 31 August 2015, see their website for further details.

Noah is released in UK cinemas on Friday 4 April 2014, certificate 12A.

The Walk Home written by Rachel Seiffert is published by Virago on Thursday 3 April 2014.

The Tate Britain Commission 2014: Phyllida Barlow is on at the Tate Britain, London from Monday 31 March until Sunday 19 October 2014.