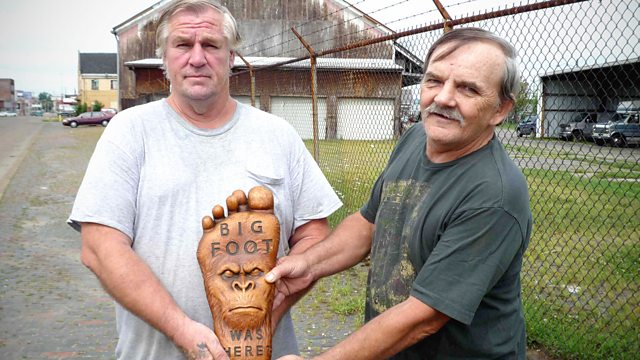 Tom Biscardi has been hunting down Bigfoot for 37 years and adopts a military approach with his 'A team' of guys armed with thermal imagers and tasers in increasingly far-out attempts to capture the beast.

Unemployed Dallas and Wayne in Ohio use more basic techniques, utilising cans of mackerel and Native American chants to lure the creature in.

Only renowned 'master tracker' Rick Dyer is intent on shooting and killing the mysterious beast as he stakes out a stretch of woods in Texas populated by homeless people, many of whom claim to have seen Bigfoot.

As truth and fact tip into malarkey, night-time hunts devolve into farcical displays of voodoo and comic stretches of the human imagination. What starts as a humorous look at perception gone off the rails, descends into a dark mystery as things get out of control during a close encounter in the woods.

Which Way is the Front Line from Here? The Life and Time of Tim Hetherington