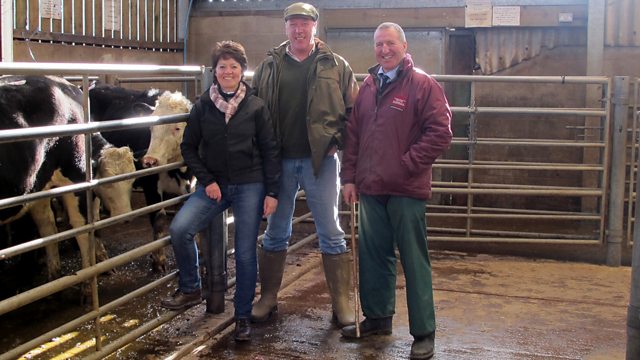 Helen Mark explores Chelford Cattle Market in Cheshire, where farmers have traded livestock and gossip for over a century.

Helen Mark travels to Chelford Cattle Market in Cheshire, along with hundreds of buyers and sellers from across the UK. It was first formed over a century ago and has weathered the storms of the foot and mouth outbreak and BSE crisis which resulted in many others closing down altogether. It still nestles on the edge of the village of Chelford, next to the station, as livestock used to be delivered by rail. Like many others though, it has plans to move out to newer facilities closer to the motorway network.

The market has sales of more than just cattle - sheep, pigs, poultry and goats but also machinery and horticulture. Helen joins auctioneer Gwyn Williams as he balances 'on the plank' above the pigs and sheep but even from that vantage point the subtle nods and winks of the bidders can be hard to spot for a novice.

Not everyone is a buyer though. Helen meets some farmers simply scouting the market for prices and for many it's a great social occasion and an opportunity to catch up on gossip. But keep that between us.

Produced in Bristol by Anne-Marie Bullock.

British Raj in the Peak District