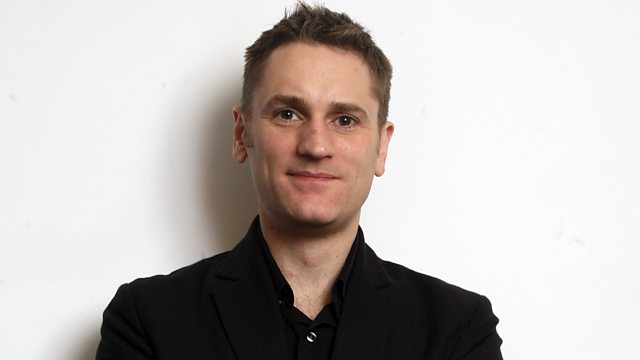 Gareth Mitchell discusses the reports on the finding of a signal left by the super-rapid expansion of space that must have occurred just fractions of a second after the Big Bang.

Cosmic Inflation and Gravity waves
Scientists in the BICEP 2 Group say they've found the earliest rumbles of the Big Bang. Theory predicts how the universe first expanded. Now we have the first observation of the phenomenon behind it. The universe was kick-started by a so called 'inflation' - vigorous growth within a fraction of a second of the Big Bang going bang. To confirm inflation you need to detect ripples in the fabric of space called gravitational waves. And to find those, you need to look for twists and kinks in this stuff. The BICEP 2 radio telescope, at the South Pole, has been measuring the direction of twists of light from the Cosmic Microwave Background Radiation - which is a form of primordial light, a remnant of the Big Bang. The signals have been released that show distortions in that light that can only have been caused by gravitational waves. They could only be there if there was inflation. In other words, these observations have shored up one of the most important theories in cosmology. Gareth Mitchell discusses what this means with BBC Science Correspondent Jonathan Amos and Astronomer at UCL Dr. Hiranya Peiris.

Photonic Radar
As the search closes in on missing Malaysia Airlines flight MH 370, radar technology has been in the spotlight. At the same time, new research published in this week's Nature journal reports on field trials of the next generation of radars - photonics based. Lead-author Paolo Ghelfi, from the National Laboratory of Photonics networks in Pisa, Italy explains their methods. Professor David Stupples, a radar expert from City University, London, explain that this cheaper, more accurate technology could end up in your car.

Show Us Your Instrument - Infrared camera
Infrared cameras detect heat, and process this as a colourful image. Dominic McCafferty, from Glasgow University, uses this kit to study stress levels in birds. When an animal is stressed, blood is drawn away from its skin and routed to the essential organs. This 'fight or flight' reflex means the temperature of certain parts of the animal drops. The infrared camera measures this, providing a non-invasive way of testing an animal's stress level. Current projects include one to test chickens, aiming to improve their welfare.

Water research
When listener Dave Conway emailed in to ask about what research is being done on water, if any - we went straight to materials scientist Professor Mark Miodownik at UCL to find out.

Taxidermy
Is taxidermy a dying art? Not for the chattering classes of New York apparently. There's been a rise in demand for people to attend classes where they learn to stuff and mount animals, and often dress them up in costumes. But what is the value of the stuffed animals in museums? In the multimedia age of interactive displays, 3D printing and computer models - do we still need the stuffed and stitched creatures in glass cases?