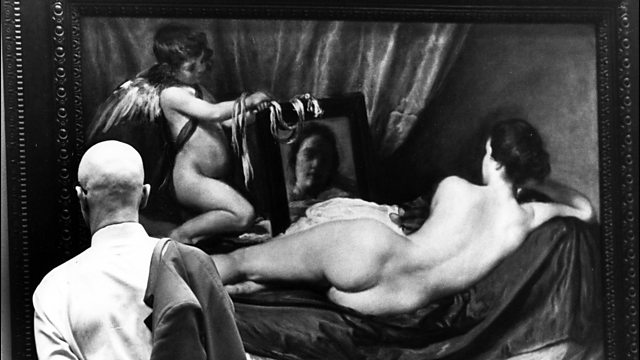 100 years after the militant suffragette Mary Richardson targeted the Rokeby Venus by Diego Velazquez, Mari Griffith looks at the motivation behind the attack, and its aftermath.

Marking the centenary of the attack by the militant suffragette Mary Richardson on one of the greatest nudes ever painted, Diego Velázquez's masterpiece 'The Rokeby Venus', Mari Griffith examines Richardson's reasons for targeting the work, and looks at the way the event was reported at the time.

One of the finest works of the Spanish Golden Age and the only surviving nude by Velázquez, The Rokeby Venus was painted during the Spanish Inquisition, escaped censorship, was brought to Britain, and was the first artwork to be saved for the nation by the National Art Collections Fund in 1906. In what became one of the most famous and symbolic acts of 20th century iconoclasm, on March 10th, 1914, the painting was badly damaged by Mary Richardson in the National Gallery in London. In a statement she said that she had "tried to destroy the picture of the most beautiful woman in mythological history as a protest against the Government for destroying Mrs. Pankhurst, who is the most beautiful character in modern history". Emmeline Pankhurst was in Holloway Prison at the time and with suffragettes including Richardson herself being subjected to force-feeding in prison, humiliation, intimidation and violence, Richardson said she was attempting to point to the hypocrisy of a society which would value an inert object over a human life. She gained little sympathy from the broader public, and received a mawling from the Press. She also varied her statements over time on the subject. Her autobiography of 1953 sets out her version of events and her reasons for attacking the painting, but it appears that that book doesn't tell the whole story. By the time of a BBC archive interview recorded in 1961, the year of her death, her reasons given include "I hate women being used cheaply as nudes. I'd seen men gloating over that picture". She also mentions in the interview that the judge sentencing her was almost in tears at only being able to give her 6 months in jail.

Art historian Mari Griffith has lectured on the Rokeby Venus, and to find out more about the story behind Mary Richardson's attack on the painting, she talks to Lynda Nead, author of 'The Female Nude', on how the 1914 attack was interpreted at the time, the outrage caused by it, and the way the incident has come to symbolize the perception of feminist attitudes towards the female nude. Mari studies the restored work in the National Gallery with the curator of Italian and Spanish paintings, Letizia Treves, and discusses its historical significance and continuing influence. Photographer Tom Hunter talks about his reinterpretation of the painting in his Hackney-based series 'Living in Hell', and the wide-ranging responses the painting still elicits. In the press coverage of the incident in 1914 Richardson was nicknamed 'Slasher Mary' by the press, and the painting likened to a human victim. Venus is hailed as a paragon of female beauty: she is young, fertile and passive. Richardson embodies the opposite form of femininity - the militant suffragist, pathologized, deemed hysterical, a deviant, even. A century on, how does history judge her?