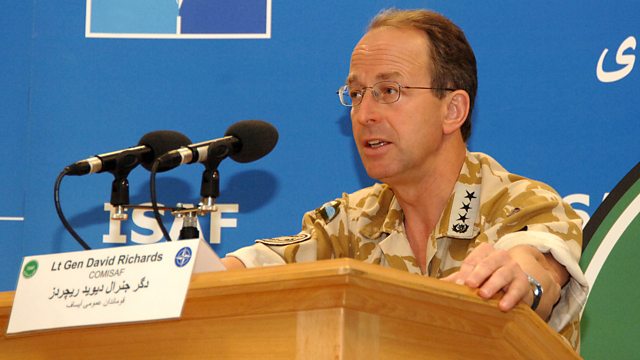 Lord Richards of Herstmonceux, former Chief of the Defence Staff, is interviewed by Kirsty Young for Desert Island Discs.

He was a soldier for 42 years, rising through the ranks to the very top becoming the principal military advisor to government. Shrewd, swashbuckling and outspoken, he is now retired from one of the most successful military careers of modern times: so illustrious he's been knighted twice.

The campaigns he led in East Timor, Sierra Leone and Afghanistan are well documented and most recently his counsel against military intervention in both Libya and Syria helped guide the Government through the most complex of international strategic defence decision-making.

He is possibly less well known for his private passions - tennis, skiing, sailing and the action man credentials must surely be further boosted by the fact that he once spent an evening as Joan Collin's bodyguard. He's also partial to a spot of karaoke.

Born in Egypt into a military family he grew up with some understanding of the very particular strain that comes with a life in the forces. Just as well because in 35 years of marriage he and his wife have moved home 29 times.