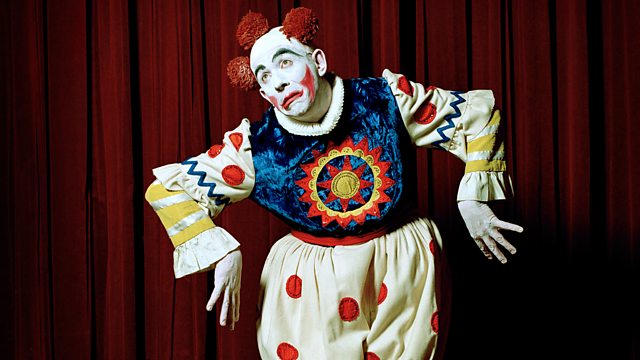 Clowning Around on 4 Extra

Tony Lidington traces the role of the clown in British humour, from the Great Grimaldi through stars of circus and panto, to modern entertainers and activists.

Tony Lidington traces the role of the clown in British humour, from the Great Grimaldi through stars of circus, pantomime and pierrots, to modern entertainers and even activists.

Drawing on his own performances, BBC archive and contemporary experts, Tony traces the clown's evolution from Shakespeare's plays, whose rustic clowns and court fools could speak uncomfortable truths to those in power. He recreates the role of "the Great Grimaldi", whose panto clown became the most popular entertainment of Regency London and defined the clown's image for generations to come. Light is also cast on the popular 19th century travelling circuses, the enormous appeal of pantos and harlequinades and the successful careers - and often tragically short lives - of entertainers like Dan Leno, once hailed as "the funniest man in the world".

The days of organized leisure time for working people and the growth of the middle class produced new diversions and the era of mass entertainment. White-clad Pierrot troupes entertained visitors at seaside resorts and troops abroad as Britain descended into two World Wars. The tradition of physical theatre and anarchic comedy clowning continued in the latter half of the 20th century, with The Goon Show and characters like Professor Wallofski, created by Max Wall.

Tony also explores the role of the clown today, still active in circus and panto and even in political demonstrations.

Made for Radio 4 Extra by Pier Productions.