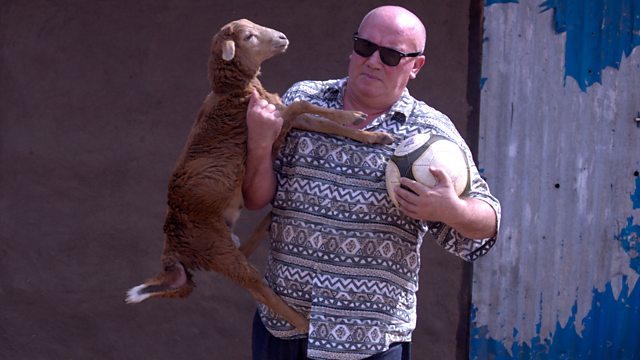 Documentary which follows veteran Serbian coach Zoran Djordjevic as he seeks to forge South Sudan's first national football team, a fascinating portrait of the birth of a nation.

A gripping story of triumph and failure, set in the world's youngest country.

South Sudan became an independent state in 2011, following almost 50 years of civil war. This documentary follows veteran Serbian coach Zoran Djordjevic as he seeks to forge South Sudan's first national football team. What follows is a fascinating and original portrait of the birth of a nation.

Although still steeped in traumatic memories, the new nation is seeking to make a mark on the international soccer stage under the dynamic and hugely ambitious new coach. The film follows the team over its first year, from the hunt for new players to buying a sheep to be its mascot and the side's first international games. Zoran's aggressive style soon leads to conflict with the chair of the soccer federation. As the euphoria of independence subsides, the team finds itself hit by bitter infighting, malaria and a financial crisis that threatens the state itself.

Cutie and the Boxer

The Village that Fought Back: Five Broken Cameras

I wanted to find a way of telling the story of the birth of a nation – South Sudan.  But beyond the diplomatic fanfare it isn’t a straight forward process to film.  So I was searching for a more left of field way into it and I found it with Zoran and the first national football team.  I saw the chance to make an unusual film that combined stirring human stories with black humour and eastern-European folk music.  Who could resist?

It was very quick.  The Storyville team moved things along at a pace.  But we did have a good taster tape by that stage and that made a big difference.

The generosity of the South Sudanese; they have just emerged from 22 years of civil war and still face crippling poverty.  But yet to a friendly outsider they will give everything.  I received so many gifts during filming:  shoes, shirts, socks, religious ornaments, soap and footballs.  It taught me that generosity has nothing to do with how much you have to give.

We are early in the film’s trajectory as it’s only been shown at IDFA in Holland.  But the reception there was fantastic.  Zoran came out for the screenings and received standing ovations, which left him very moved.  It was a wonderful experience to start and end the film together and we look forward to doing screenings in other countries.

I greatly admire the work of Sean Fine (“War Dance”) and Danfung Dennis (“Hell and Back Again”) for combining observational scenes with beautiful aesthetics.  And I really enjoyed the Oscar-winning “Undefeated”, which taught me the value of simply “being there” – it’s a film about an American high school football team and the filmmakers didn’t miss a single practice in nine months of filming.

DVX User where cameramen and cinematographers share advice and argue over largely pointless minutiae.  I confess to being an obsessive researcher of lenses and the like.  Other than that, the Guardian online.

I would interview the respective founders of the world’s main religions.  I would ask them whether they had any inkling at the time of what would later be done in their name.  Do they approve of it?  And did we record their views / life correctly?  Then I would show them Twitter and see what they wanted to write on it.

Be bold, take creative risks and trust your instincts.  And perhaps most importantly, “be on time”!

My brain.  Although all the shiny and expensive equipment is important in filmmaking, it’s the ideas that matter most.

Having recently returned from an extended spell in South Sudan, I would probably go for something like a quiet provincial library in middle England.  There would be a ready supply of Earl Grey and we’d go home at 4.30pm when it closed.  Variety keeps the creativity well stoked.

Boring choice, I know, but it would have to be Casablanca.  Every line and every scene just feels perfect.  If pushed for a more modern choice, I love Amores Perros, for its gritty, raw energy and artful documentary feel.

I once made a series about the police force in Fiji at a time when no one had made an observational documentary in the country before.  For a while all they would allow us to film was the police band but we got there in the end.

The Goldfinch by Donna Tartt.  A brilliant story beautifully told.