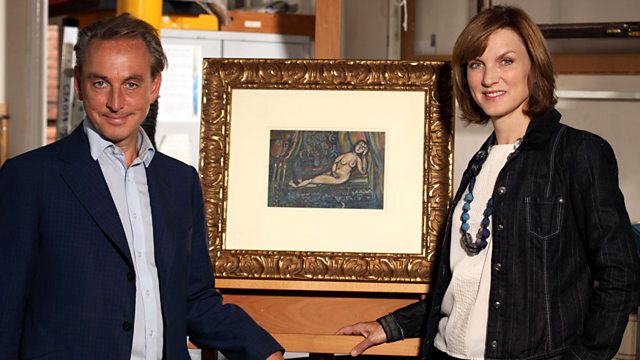 Fake or Fortune? Series 3
Episode 3 of 4

Art series with Fiona Bruce and Philip Mould, who delve into the Russian art market as they investigate a painting attributed to modern master Marc Chagall.

The Fake or Fortune team plunges into the murky world of the Russian art market when they investigate a painting attributed to modern master Marc Chagall.

In 1992, a property developer seized the chance to invest £100,000 in a work by one of the 20th century's greatest artists - Marc Chagall. The picture had surfaced in Russia after the fall of communism, and was offered at a fraction of its full value. There was just one catch - it hadn't been fully authenticated by the Chagall Committee in Paris. Twenty years later, the owner wants to find out if he made a shrewd investment - or an expensive mistake.

The search for clues leads Fiona to Chagall's hometown of Vitebsk in the former Russian republic of Belarus, where she makes connections between the painting and the artist's life story, but events take a more sinister turn when she discovers a news report about the sale of a fake Chagall in the city of Minsk.

With scientific testing raising more questions than answers, Philip travels to Los Angeles to consult a notorious forger called Tony Tetro who specialized in faking the work of Chagall. As the team grapple with the shadowy world of the modern Russian art market, everything hinges on a critical test to determine the date of a suspicious pigment as the investigation threatens to turn into a 'whodunnit'.

And when the dust settles, there is one more shocking and unexpected twist that leaves the owner with a difficult decision.

Owner gives up fight to save 'Chagall' painting