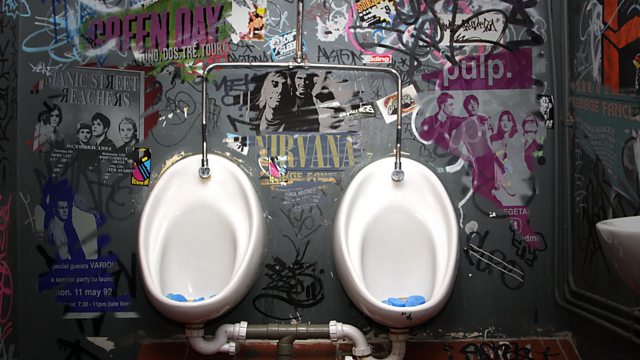 I've Played in Every Toilet

4 Extra Debut. John Harris visits some of Britain's surviving small music venues on the legendary, but declining, 'toilet circuit'. From 2014.

John Harris visits some of Britain's surviving small music venues and asks what will happen if they disappear altogether.

All over the UK, small music venues are threatened with closure, or have already gone out of business. Many of them have hosted gigs by truly legendary names and were once securely built into the so-called 'toilet circuit', which allowed promising musicians to take their first tentative steps on the national stage. Without them, we may not have heard from Coldplay, Oasis, Blur - or such contemporary talents as The Vaccines and Mumford and Sons. But crushed by powerful landlords and the rising expectation that music - whether live or recorded - should be free, these places are struggling as never before.

John's journey takes in The Forum in Tunbridge Wells, once an actual public toilet, which has survived over the last 20 years because the volunteers that run it haven't profited from the business. He also travels to Hull to visit the Adelphi Club, a semi-detached house on one of the city's residential streets which has hosted bands such as Pulp, Green Day and Radiohead. Manager Paul Jackson says things have been tougher than ever for the venue, but he's determined to carry on.

Finally John visits Newport, once home to the legendary TJ's where Kurt Cobain famously proposed to Courtney Love. Speaking to the daughter of the former owner John Sicolo and Nicky Wire from Manic Street Preachers, he finds out what happens when a town loses its beloved venue.

He also speaks to BBC DJ Steve Lamacq and journalist Kate Mossman to consider how - without these venues run on a mix of hope and blind faith - we will discover the next generation of musicians.

A Unique production first broadcast on BBC Radio 4 in February 2014.