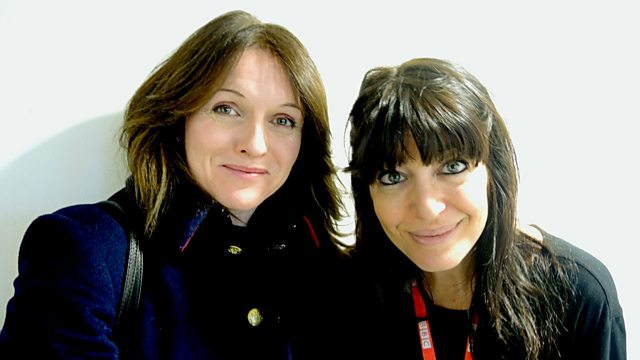 Dervla Kirwan joins Claudia to talk about her role in The Weir and Joanne Harris delves into the world of Norse mythology for her new novel, The Gospel of Loki.

Dervla Kirwan joins Claudia to talk about her role in The Weir and Joanne Harris delves into the world of Norse mythology for her new novel, The Gospel of Loki. We'll also be hearing from Ralph Fiennes, who directs and stars in The Invisible Woman, all about Charles Dickens and his secret affair. Plus the latest film and book reviews with Helen O'Hara and Samantha Buckley.

Dervla Kirwan is Currently Starring in The Weir

In Brendan’s pub, isolated above the town, the men are gathering for their daily pint. The arrival of a stranger in their midst – a woman - spurs them to impress her with stories.

Her new novel is a first-person narrative of the rise and fall of the Norse gods - retold from the point of view of the world's ultimate trickster, Loki. It tells the story of Loki's recruitment from the underworld of Chaos, his many exploits on behalf of his one-eyed master, Odin, through to his eventual betrayal of the gods and the fall of Asgard itself.

The Gospel of Loki by Joanne Harris is out now.

The Invisible Woman stars Ralph Fiennes as Dickens and Felicity Jones as the 18 year old actress he falls for.

An imperfect man fights for survival during an uncertain time in America. Inspired by true events, Ron Woodroof’s story of strength is told in Dallas Buyers Club.

The Dallas Buyers Club is out now, rated 12a

Dickens - famous, controlling and emotionally isolated within his success - falls for Nelly, who comes from a family of actors. The theatre is a vital arena for Dickens - a brilliant amateur actor - a man more emotionally coherent on the page or on stage, than in life. As Nelly become the focus of Dickens' passion and his muse, for both of them secrecy is the price and for Nelly a life of "invisibility".

The Invisible Woman is out today, rated 12A

In RoboCop, the year is 2028 and multinational conglomerate OmniCorp is at the center of robot technology. Their drones are winning American wars around the globe and now they want to bring this technology to the home front.  Alex Murphy (JOEL KINNAMAN) is a loving husband, father and good cop doing his best to stem the tide of crime and corruption in Detroit.

Robocop is in cinemas now, rated 12A

A sweeping, epic war-torn romance set during the Second World War which deals with the little known Alaskan campaign during which American and Canadian forces fought off a Japanese invasion of the Aleutian Islands whilst trying to survive in a bleak and inhospitable landscape for which they were horrendously under-equipped.

The Visitors by Sally Beauman published by Little, Brown

This is largely set in Egypt during the 1920s and 30s and concerns the events surrounding the discovery and excavation of Tutankhamun’s tomb. The story is told as a series of reminiscences by Lucy, now in her 90s, who witnessed these pivotal events as a young girl.

This is set in pre-revolutionary France and tells the story of a young engineer who arrives in Paris from the countryside tasked with the exhumation of an ancient and overflowing cemetery. His work draws him into contact with the neighbourhood’s many eccentric characters several of whom have a powerful attachment to the cemetery and the dilapidated church that dominates the site.