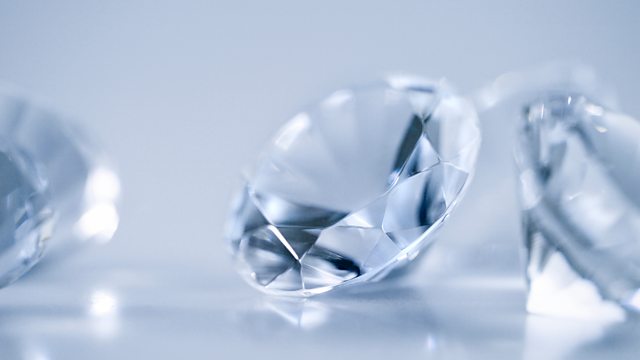 Texts and music inspired by jewels and gems, with readers Robert Glenister and Fenella Woolgar. With Webster, Graves and Dorothy Parker plus Bizet, Stravinsky and Wolf-Ferrari.

Robert Glenister and Fenella Woolgar are the readers in this edition of Words and Music inspired by jewels and gems. There are readings from the King James Bible, John Webster, James Thurber, Robert Graves and Dorothy Parker and music by Jazeps Vitols, Bizet, Stravinsky, Wolf-Ferrari, Orlando de Lassus, Tchaikovsky and Bartok.

The appeal to me of Jewels lies in the ambivalent nature of their role in culture.  They can represent both false material values and spiritual truth.  This seems to be the case across cultures and through history.

In folk tales jewels are often hoarded by dragons, or sorcerers – like Abanazar in Aladdin who has a cave of dazzling gems or the dragon in Beowulf who jealously guards his treasure store.  In Shakespeare’s The Merchant of Venice Portia’s suitors are presented with three caskets, composed of gold, silver and lead.  Only Bassanio makes the correct choice of the lead casket because he realises that true value doesn’t lie in a glittering surface.

The source of Shakespeare’s story is thought to be a medieval Italian tale called Il Pecorone (The Simpleton).  However, in most medieval literature jewels symbolise spiritual truth and not misguided materialism.  In this programme I’ve picked an extract from the beautiful allegorical poem The Pearl. The author is an unknown late 14th century poet and his verse is the story of a man grieving for a precious lost pearl without a spot (‘ þat precios perle wythouten spot’.)  He falls asleep and has a dream vision (a standard of medieval poetry) of a stunning girl dressed from head to foot in pearls.  It becomes apparent that his lost pearl is actually his dead daughter and in the vision she counsels him spiritually and consoles him that she is now in heaven.   The Pearl is an example of ‘lapidary verse’ – meaning verse that has been cut and polished with infinite skill.

I have also included a reading from the charming Middle Scots poem The Cock and the Jasp by Robert Henryson, which is based on an Aesop fable where the ‘jasp’ represents Wisdom. Bob Smith, who translated the verse into modern English, has done a brilliant job of capturing the perky tone and atmosphere of of the original.

The most famous description of jewels in Christian  literature occurs in the Book of Revelations in the Bible, when the New Jerusalem is revealed to John of Patmos in a vision and he sees the walls of the city are entirely formed of jasper (a transparent, glittering stone like diamond) with the foundations formed of other jewels such as sapphire, emerald, beryl and amethyst.

Belief in the magical, medicinal and emotional properties of precious stones goes back beyond recorded history. There is an early cuneiform tablet which lists stones that facilitate conception and birth.  The colour of precious stones has always been considered of great significance.  For instance, wearing green jewelry was thought to encourage new growth for crops and fertility.  Cleopatra’s favorite gem was the emerald.  Emeralds have often been associated with envy (we still talk about being ‘green with envy’) rubies usually symbolise passion and desire and amethysts were a Christian symbol of purity.

I was spoiled for choice when choosing jewel-related music.  Of course I had to include the famous Pearl Fishers’ Duet – and I picked a recording by the wonderful Swedish tenor Jussi Bjorling and American baritone Robert Merril. I have also chosen Joan Sutherland singing the famous Jewel Song from Gounod’s opera Faust – to my mind no singer has ever bettered her recording of this with the Royal Opera House orchestra in 1960, it is so blithe and sparkling.

Balanchine’s ballet Jewels (currently in the repertoire of the Royal Ballet) uses three gem stones, Emeralds, Rubies and Diamonds, as starting points to explore a variety of dance styles and he uses music by Faure, Tchaikovsky and Stravinsky.  Tchaikovsky’s music for the Pas de Quatre in the third act of The Sleeping Beauty includes dances for the Silver, Sapphire and Diamond fairies.  The ballet’s choreographer Petipa described the Diamond fairy variation as “brilliant, shining like electricity” .

One of my favourite literary gold-diggers is Lorelei Lee, the heroine of Anita Loos’s novella Gentlemen Prefer Blondes, which was famously turned into a film starring Marilyn Monroe as the diamond-loving heroine.   Fenella Woolgar reads from the original book,  told in the form of the journal kept by Lorelei as she searches Europe for the perfect jewel-providing gentleman friend.  I have also picked a poem by Dorothy Parker, The Choice, in which she laments her lack of the gold-digging gene.

To end the programme Robert Glenister reads from James Thurber’s delicious fantasy tale The Thirteen Clocks.  It tells of the evil Duke of Coffin Castle, who demands his daughter’s suitor, Prince Zorn of Zorna, brings him with a thousand jewels before he grants him her hand in marriage.  But although Zorn manages to achieve the quest and win his bride, things do not end happily ever after for the Duke and his hoard of jewels.  He should have remembered Shakespeare’s warning in the Merchant of Venice that ‘all that glisters is not gold’.