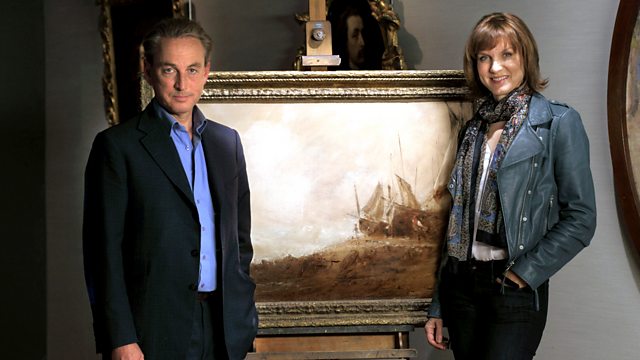 Fake or Fortune? Series 3
Episode 2 of 4

Art series with Fiona Bruce and Philip Mould. The Fake or Fortune team tries to prove that not one but two paintings are missing works by John Constable.

The Fake or Fortune team takes on a doubly challenging investigation as they try to prove that not one but two paintings are missing works by one of Britain's best-loved artists - John Constable.

Gillie Dance used to keep her painting of Yarmouth Jetty under the bed in her London home, never quite believing it could be by Constable - but Fiona Bruce starts to get excited when a previous owner turns out to have a close connection to the artist's family.

The other picture, A Sea Beach Brighton, used to hang in the prestigious Boston Museum of Fine Arts - until they mysteriously sold it off at a fraction of its value as a recognized Constable in the early 90s. American attorney Tom Toppin and his wife Bernie snapped it up - but they've been struggling to prove its authenticity ever since. Philip Mould has a hunch that the proof they seek lies in other Constable paintings in US galleries - but will the experts agree?

The trouble for the team is that Constable is one of Britain's most widely faked artists and there are surprises in store when paint analysis suggests one picture has a murky past, while an x-ray provokes screams from Fiona and owner Gillie when it reveals one of the biggest shocks of the series.

See all clips from Constable (2)