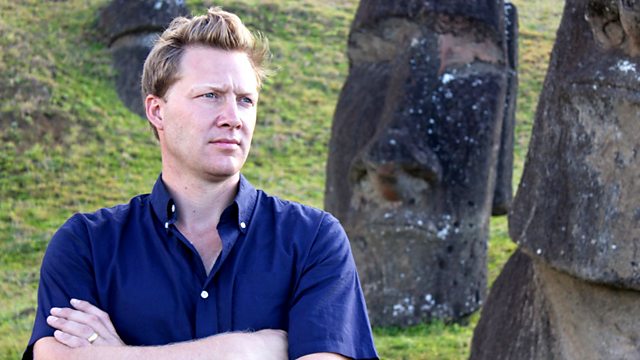 Dr Jago Cooper uses scientific and archaeological evidence to argue that Easter Island's demise was not solely due to its inhabitants' wilful use of its natural resources.

The contrast between the majestic statues of Easter Island and the desolation of their surroundings is stark. For decades Easter Island, or Rapa Nui as the islanders call it, has been seen as a warning from history for the planet as a whole - wilfully expend natural resources and the collapse of civilisation is inevitable.

But archaeologist Dr Jago Cooper believes this is a disastrous misreading of what happened on Easter Island. He believes that its culture was a success story not a failure, and the real reasons for its ultimate demise were far more shocking. Cooper argues that there is an important lesson that the experience of Easter Island can teach the rest of the world, but it doesn't begin by blaming its inhabitants for their own downfall.

This film examines the latest scientific and archaeological evidence to reveal a compelling new narrative, one that sees the famous statues as only part of a complex culture that thrived in isolation. Cooper finds a path between competing theories about what happened to Easter Island to make us see this unique place in a fresh light.

See all clips from Easter Island: Mysteries of a Lost World (3)