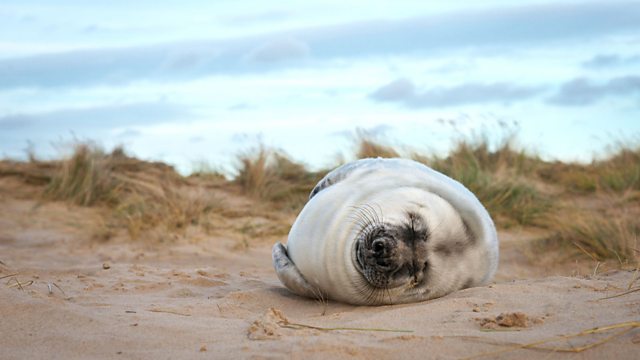 A small group of female grey seals first chose the naturally managed sand spit Blakeney Point, on the North Norfolk coast as spot to haul out and give birth to their pups back in 2001. That year twenty-five pups were born and since then the new colony has grown year on year.
Now every year, as autumn turns to winter, a whole soap opera plays out on the beach. Throughout November and December, white furred pups are born, weaned, and abandoned within three weeks. Males fight; establishing loose territories among the females to secure the best chance to sire next year's pups. Females raise their pups while the males slug it out and as soon as their pups are big and fat enough to go it alone their mothers mate and head back into the sea.
Twelve years after the first pups were born at Blakeney the colony is thriving. By the end of December 2013, over fourteen hundred pups had been born with more on the way. Although delighted with the success of the new residents this burgeoning population has led to major challenges for the landowner, the National Trust to keep both the grey seals and the curious public safe from one another.
To add to the challenge early December saw the biggest tidal surge in 60 years hit the north Norfolk, inundating many of the nature reserves along the coastline, including Blakeney.
Presenter, Trai Anfield goes to Norfolk to see how well the Blakeney grey seals weathered the surge and to witness the drama.
Produced by Ellie Sans.

Ajay Tegala is a Coastal Ranger for the National Trust at Blakeney, on the North Norfolk Coast. Being a coastal ranger involves monitoring and protecting the unique wildlife on Blakeney Point. In summer this is mostly the breeding birds and in the winter; the ever-growing breeding Grey Seal population.